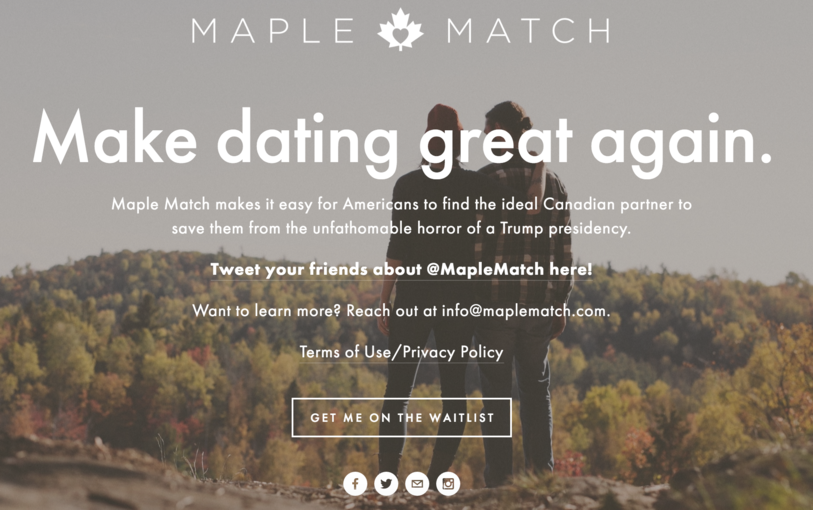 As the US presidential election continues to cause tension and divide public opinion across the US, there are increasing reports that some Americans would leave the country if Donald Trump won the election.

A recent Ipsos poll found that 28% of Americans surveyed aged between 18 and 34 would consider moving to Canada if Trump was to become President in November.

And a new dating site has popped up to help these migrators by making it easier for Trump-fleeing Americans to find their ideal partner outside of the States.

Maple Match is a new service that vows to “make dating great again”, by assisting any single non-supporters of the presidential candidate with their search for love in the neighbouring country of Canada.

The site reads: “Maple Match makes it easy for Americans to find the ideal Canadian partner to save them from the unfathomable horror of a Trump presidency.”

It was founded by Joe Goldman, a 25-year-old education researcher based in Texas, as a response to his appreciation for Canada’s increasingly liberal outlook, and his general interest in the country itself.

Goldman told The Guardian: “When this election came about and I started seeing Donald Trump and the rise of his candidacy I started getting concerned, just like anybody else.

Earlier this month, Maple Match was receiving 200 sign-up requests an hour, and on 10th May almost 5,000 singles have signed up to use the app.

And so far, the app has seen a response from both Americans and Canadians, with US singles wanting to travel across the border to flee from Trump voters, and the latter seeking singles who disapprove of the Republican candidate.

Goldman added: “This site shows that a lot of people are frustrated with the current dating options.

“A lot of Americans really want to meet Canadians. They’re looking for something new and something better.”

Although the app has not yet launched, singles are able to sign up to a waiting list which will allow them early access once it goes live.