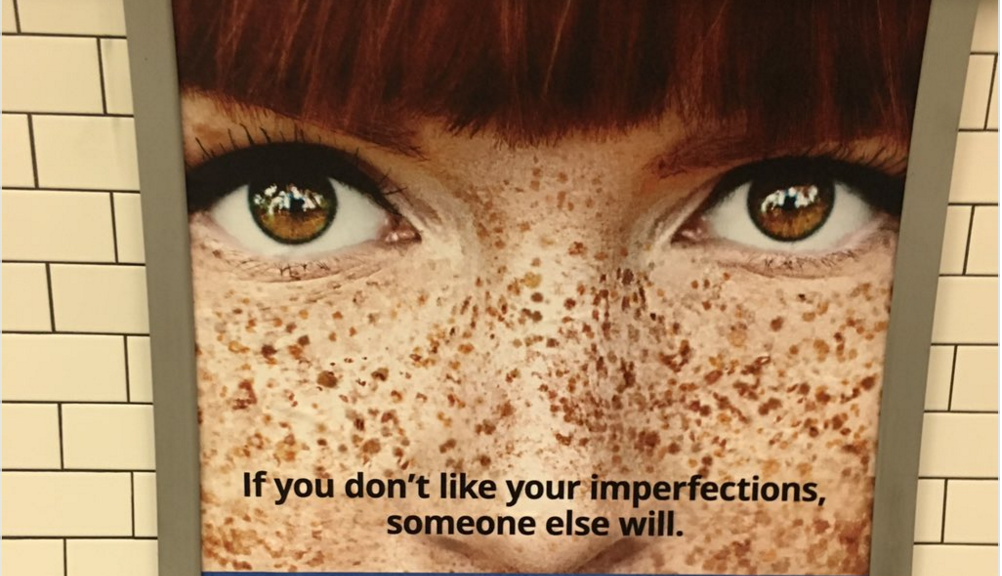 Dating site Match.com‘s new billboard ads have received some unwanted attention from a number of commuters who claim they suggest that having red hair and freckles are flaws.

The posters, which recently appeared in Tube stations across London, feature a woman sporting red hair and freckles and a person with one blue eye and one brown eye, both accompanied with the tagline: “If you don’t like your imperfections, someone else will”.

The two ads are Match.com’s latest addition to its #LoveYourImperfections campaign, which it has been running since 2014.

However since their release, The Advertising Standards Authority has received a number of complaints from individuals concerned about the message the adverts were sending out.

@Match @tfl I have just made my 1st ever complaint to @ASA_UK, about this ad. #LoveYourImperfections pic.twitter.com/IsZKRU43gj

Speaking about the complaints, The ASA said: “We’re currently carefully assessing the complaints to establish if there appear to be any grounds for action.

“It’s important to stress, however, that we haven’t launched an investigation.”

Over the last week, more individuals who have come across the ads on their travels have taken to Twitter to express their anger towards the company’s choice of images.

@Match appalled at your latest marketing campaign #Loveyourimperfections. Who are you to say what is perfect? pic.twitter.com/svA8rxY4u8

A Match.com spokesperson said in statement: “The ‘Love Your Imperfections’ campaign is all about celebrating perceived physical and behavioural imperfections, from having freckles to being chubby, messy or clumsy. We strongly believe this is what makes people unique and desirable.

“Our adverts reveal common perceived imperfections and quirks of Brits — these include freckles which some people who have them may see as an imperfection.

“We think freckles are beautiful and our posters are designed to encourage everyone who has them to be proud.

They added: “We’re sorry if anyone has been offended by our latest ad — that was not our intention — but we’re really encouraged to see so many people standing-up for what makes them unique.”

Whilst its #LoveYourImperfections campaign has generally seen a positive response from the public, this is not the first time that Match.com has received an unwanted reaction to its poster ads.

Look, Charlotte may be a sweet simpleton but Mark is a MONSTER. pic.twitter.com/p43wJ3XjJb

In January, one of its ads – which featured a man called Mark – caught the public’s attention, because his imperfection is that he “never has his travelcard ready.”

The poster struck a chord with Londoners, by recognising commuters’ shared annoyance at people who block the ticket barriers on the tube, and some have taken to social media to shame “Mark” for this infuriating trait.