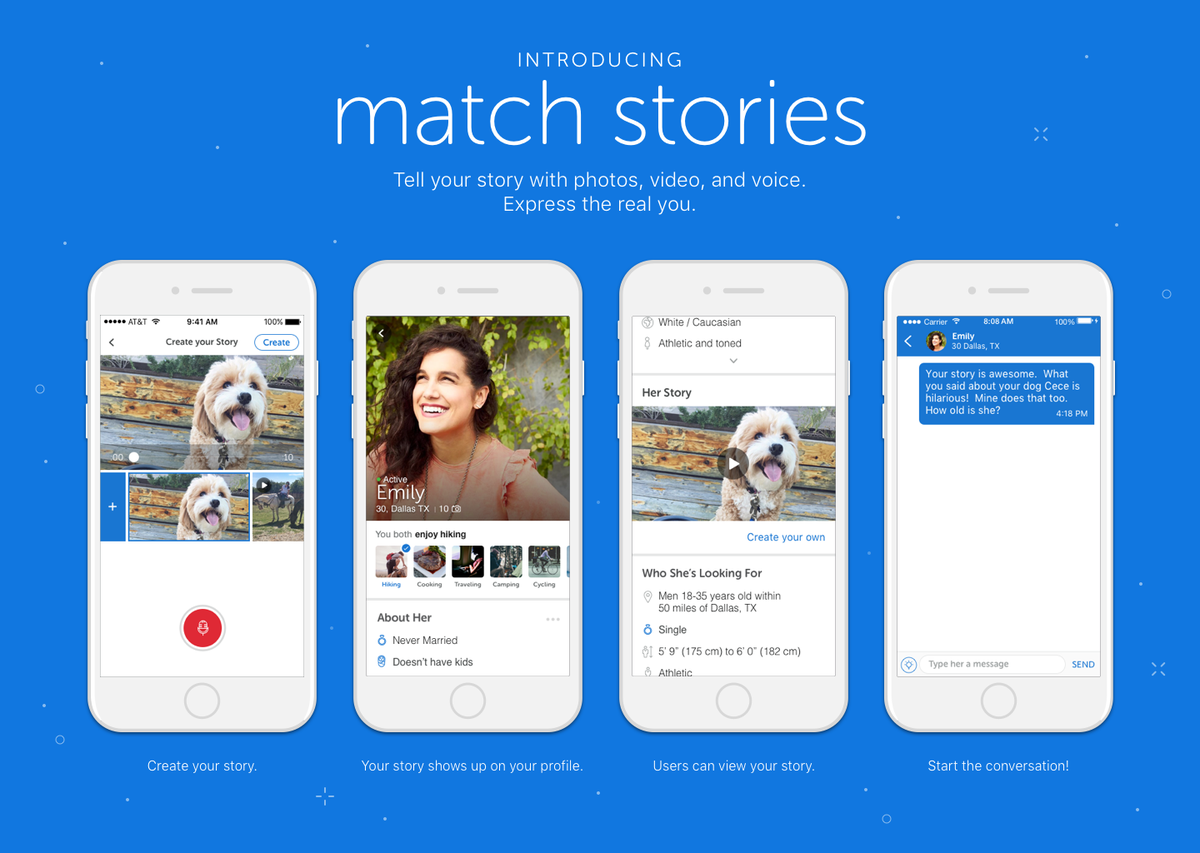 Match.com is plotting the launch of a new video feature called Match Stories.

The new release takes inspiration from the hugely popular stories features on Instagram and Snapchat.

Match’s take on the stories idea lets singles stitch together short video clips to form their own dating profile story.

These stories are limited to 60 seconds, and can be a mixture of photos and video.

Users of Match Stories can also provide a voiceover for their profile story.

The video service will be released later this year, according to Match Group North America CEO Mandy Ginsberg, who was interviewed by Mashable about the upcoming feature.

Ginsberg said that rather than providing a daily snapshot into someone’s everyday life, like Snapchat’s and Instagram’s features, Match’s stories are designed to be a “quick intro that gives a fuller sense of who you are”.

Mobile dating rival Bumble announced a similar feature at the start of the year, called BumbleVID, which bore more of a resemblance to the Snapchat and Instagram Stories.

BumbleVID lets users collect a series of video clips into a thread to add to their profile, but each clip would disappear after 24 hours.

When it launched, the video feature was only available for those with verified profile photos, and has not yet been expanded to the full user base.

Speaking about the new Match Stories feature, Mandy Ginsberg said: “We’re really clear on what we are and what we’re not. We’re not going to be for the 19-year-old college student. That’s just not who Match is for.

Despite this, the Stories feature is likely designed to appeal more to younger users, and to help change the perception of Match.com as a desktop-focused legacy brand.

And the company wants to fuel this change by backing the launch, and future releases, with “aggressive marketing campaigns”.

This plan was laid out by Match Group CEO Greg Blatt during the company’s Q1 results earlier this year, who said the brand’s strategy was to release “cool, distinctive new feature” every quarter and follow them with strong marketing campaigns.

Blatt said: “Match has never done anything like this before. Frankly, I’ve been doing this a long time, I can’t think of a single product owned by us or anyone else that would have released a series of significant consumer features in such rapid succession.

“And we’re going to back each of those rollouts with the most significant marketing spend in the entire category. We really think by the end of the year, we’re going to make major changes on how people think about Match, and our ability to grow our user base in that most attractive of all user segments.”

Match Stories is the second in this run, after launching its Happn-style Missed Connections feature, which 60% of its DAUs are now using, earlier this year.

And having dedicated between 20-30% of its development capacity to this Stories feature, according to Ginsberg, the team will begin testing it in a handful of markets this summer before a national roll out later this year.