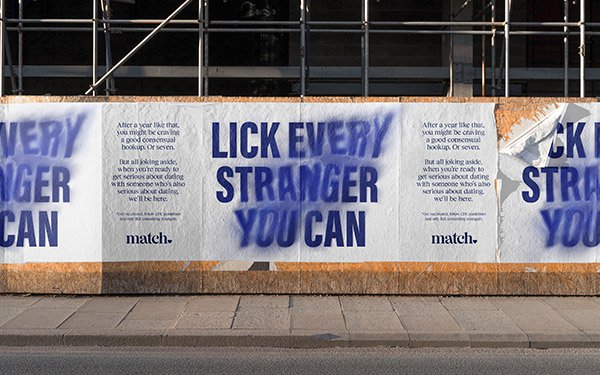 Match has unveiled a unique marketing campaign for the summer, encouraging singles to get out there and have some fun with their new freedom.

The ‘Lick Every Stranger You Can’ promotion is targeted at everyone who has spent the past year without any intimacy and want to meet lots of new people during the ‘Summer Of Love’.

Outdoor billboards are being displayed throughout the month of June in New York City and Los Angeles. Match has also created branded lollipops that promise to act as something to “practice with”.

Mo Said, founder of Mojo Supermarket, the creative agency behind the campaign, told MediaPost: “We think it perfectly encapsulates what the culture thinks every single person wants to do right now, but we wanted to use that line as a moment to show Match’s POV and reinforce they are here for love.

“[The messaging] is different from where the brand has been, but we’d been working on this next version of Match already, so it felt pretty in line with where we’re going.”

However, this new strategy contradicts Match’s usual messaging of facilitating long-term relationships. In fact, CEO Hesam Hosseini spoke to Yahoo Finance yesterday with a clear statement for singles who just want something casual at the moment.

He said “That’s totally cool. Just don’t come to Match”, before suggesting they come back in a few months when they’re ready to settle down.

Hosseini also talked about Match Group’s upcoming collaboration with the White House which aims to encourage more dating app users to get vaccinated. He hopes that it will be more effective for people to see their peers having a vaccine than celebrities on Instagram.