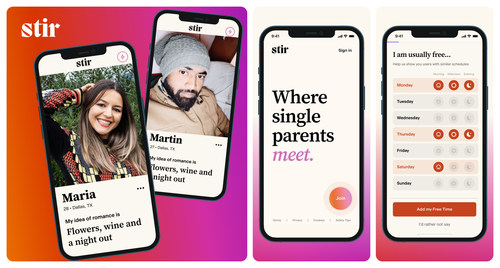 Match Group has announced that it is launching the latest addition to its dating services lineup with Stir, an app designed exclusively for single parents. With the new release, the company aims to address the 20 million single parents in the U.S. who are under-served by existing dating apps, the company says.

Stir’s key feature will be a scheduling option called “Stir Time,” which allows parents to overcome the often difficult aspect of coordinating time to date between two different people’s schedules which may have to take into account co-parenting arrangements, children’s activities and other parenting-related commitments.

The dating app maker said one in four single parents (27%) reported that coordinating schedules is something that keeps them from being able to go on dates, which is why it introduced Stir Time.

With the in-app feature, users can optionally indicate which days of the week and times of day they tend to be free, in general terms, like “morning,” “afternoon” and “night.” That way, parents who may only have a few open slots per week of so-called “free time” can get matched with others who have similar schedules.

Dinh Thi Bui, VP of New Verticals at Match Group, said: “Having kids shouldn’t be a deal-breaker when dating. We’re dedicated to giving single parents a dating experience where they are celebrated and feel like they can be themselves. With that, our hope is that they can truly focus on having a personal life beyond navigating parenthood.”

Match Group also conducted research from the target demographic of Stir. New data from 1,494 Stir members reveals what single parents are really looking for when seeking a dating partner and the challenges that they face dating with kids. Key insights include: