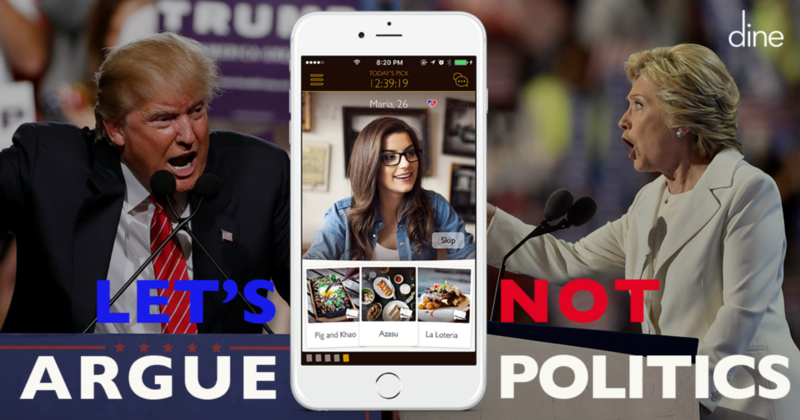 Following the result of the 2016 presidential election in the US, the country is more divided than ever over the result.

And with many Americans still up-in-arms after Trump’s surprising win, Dine was concerned that political differences could result in many first dates turning into “nasty political debates”.

So, to tackle the issue, Dine, which offers singles suggestions of where to meet for dinner or a drink, has introduced a new feature that lets users make it clear to others they do not want to discuss politics on a first date.

Called “Let’s not argue politics”, the feature allows users to display an icon on their profile to let others know that politics is not a topic of conversation they want raised on date one. The CEO of Dine app, Keisuke Kamijo, said: “Obviously, people are feeling very down about the outcome of this election but this outcome shouldn’t discourage people from getting out and dating.

“What I’ve seen is nothing less than a war happening on various social media channels as well as in real life.

“I don’t want politics to get in the way of my users, so I wanted to give people the opportunity to let others know that they would rather not discuss politics when going out on a very first date.”

To activate the feature, users can go to the edit profile section of the app and click the “Let’s not argue politics” button, which will then display the icon on the user’s profile.

You can find out more about Dine here.