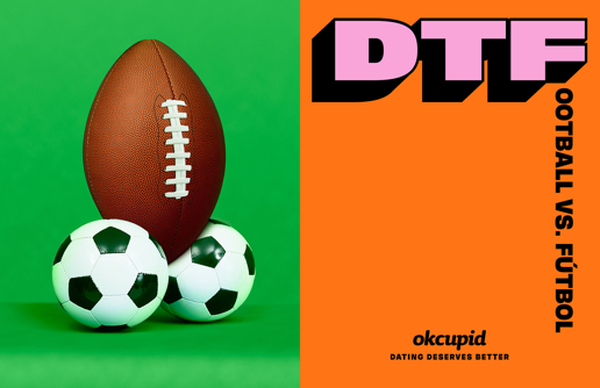 Two OkCupid billboards have been rejected by the city of Portland after ad space vendors decided they were too phallic for public display.

The billboards are part of the app’s ‘DTF’ advertising campaign, which encourages users to redefine the acronym for themselves.

Users could be ‘DTFinish my novel’, OkCupid suggested, or ‘DTFight about the president’.

The example used in the pulled billboard was ‘DTFootball vs fútbol’ – suggesting users might argue about whether they preferred association football (soccer) or the NFL.

The text was paired with an image of two association (soccer) footballs and an American football in a phallic arrangement.

The refusal will be seen as a defeat for Wieden and Kennedy, the designers of the advertisement, who both hail from the city of Portland.

OkCupid were hoping to place the advertisement as soon as possible in January to attract the attention of consumers during peak dating season.

The phallic advert will be replaced with an image of two people using the same piece of dental floss, along with the caption ‘DTFloss together’.

Portland residents can expect to see the new, cleaner ads on Burnside above Dante’s and on the corner of 12th and Alder soon.