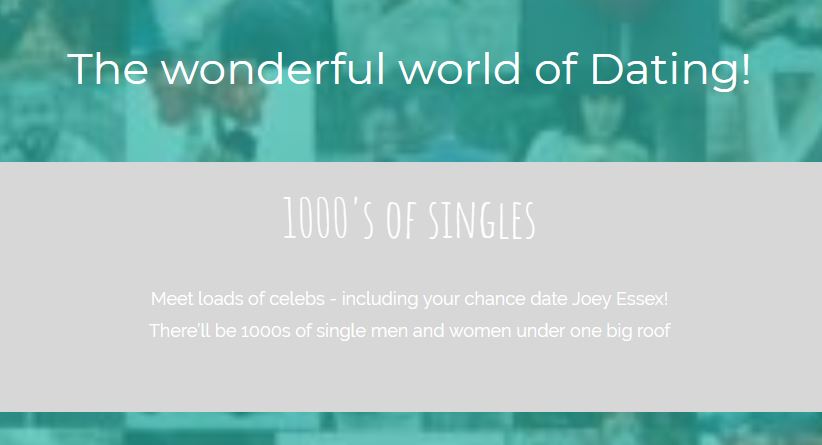 A number of UK-based online dating startups have been left out of pocket following the sudden cancellation of The Dating Show Live.

Scheduled to take place at the Birmingham NEC from 29-30 June 2019, the event advertised itself as a “show for singles and their friends of all ages (…) who may want to explore dating or simply want to look at opportunities and activities with like-minded people.”

The organisers had partnered with a raft of celebrities, including Joey Essex, Melinda Messenger, Merlin Griffiths and Sheila Ferguson. Attractions included a roller rink, makeup artists, live music and a popup First Dates Café. A web archive version of The Dating Show Live website can be found here.

Multiple sources told GDI that 60+ companies paid to sponsor the event, at rates of £1,500 to £10,000 per exhibit. They were told to expect a footfall of 10,000 singles over the course of the weekend.

Among the contributing brands were a number of online dating startups, including Bare, Oblivio, Piin and Old Style Dating. Both Bare and Piin were looking to use the event as a launchpad, with the latter hiring a videographer and additional staff to make the most of the day.

Days before the event, sponsors received a message from liquidators announcing the dissolution of Black Opal Events Limited. Some said they had received an email from organisers narrowly ahead of time, but others had not.

GDI spoke to a number of the affected brands. One said they were told that ticket sales were “on track” just two weeks previously, and that Black Opal were still trying to sell sponsorship packages to them at that time.

A source with knowledge of the marketing and ticketing estimated that only around 1,000 tickets had been sold – one tenth of the venue’s capacity. The same source noted how organisers had actively discouraged them from purchasing insurance.

A spokesperson for the NEC said to GDI: “We are extremely disappointed that the organiser of Dating Show Live, due to be held this month, has chosen to cancel the show. Ahead of offering a tenancy for any new event at the NEC, we employ a rigorous internal vetting process, as well as external credit checks on the new event’s organiser. As with any new enterprise however, there is a balance of risk versus reward that all parties need to consider when deciding whether to support a new event.

“When the NEC does offer a tenancy to a new event organiser, our contract is with that organiser, and it is their responsibility to ensure any contractual commitments they have with exhibitors, celebrities, visitors, contractors etc. are met. However, we completely understand the implications of cancelling an event like this. We know that event organisers never take the decision lightly, and consequently we make every effort with them to ensure all avenues are explored before they have to make the unfortunate decision to cancel.”