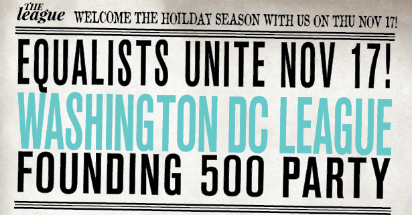 Just weeks after launching in Boston and Chicago, The League has today announced it is opening its doors to singles in Washington D.C.

The exclusive dating app founded by Amanda Bradford first launched in 2015 in San Francisco, and since then has expanded to New York, Los Angeles, Boston, Chicago and now Washington D.C.

The D.C launch was originally planned for January 2017, but was pushed forward by Bradford after Trump’s surprise election win.

The League said: “In a nation riddled with fear and uncertainty, Bradford, whose app encourages strong ambitious women to engage in egalitarian relationships rather than fall into traditional gender roles, felt the best response was to bring The League to the nation’s capital sooner rather than later.

“The League will launch in DC not only to help strong men and women of all races, nationalities, and sexualities find partners who support them in their endeavours, but also to provide a supportive community for the thousands of women who may feel alienated by the current election results.”

To celebrate the launch, The League is hosting a party at Hawthorne to help bring singletons in the area together.

Last month The League held two mixers for the “top 500â€³ applicants from Boston & Chicago, who were handpicked by the dating company.

The League seeks to create a community of singles looking for “like-minded, ambitious professionals”, requiring users to register with both a LinkedIn and Facebook account, then using a further internal screening algorithm that decides whether someone is allowed entry.

To find out more about The League please click here.