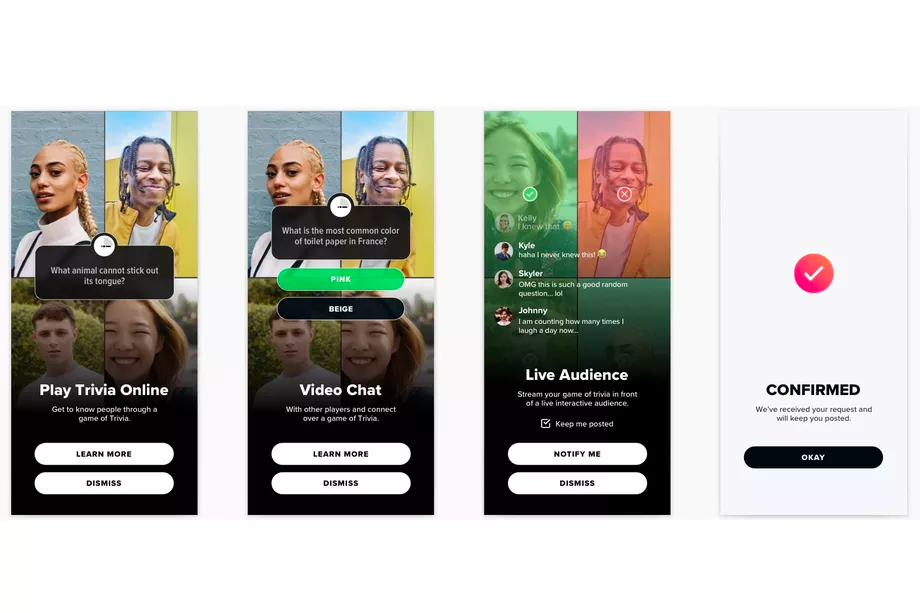 More details have emerged about one of Tinder’s upcoming video features, which should help users continue to connect while practising social distancing.

It was first announced in Match Group’s Q1 financial results that the dating app will be getting a private video chat function by the end of the quarter. The parent company has already introduced live video to Plenty Of Fish and Match.com in the past few weeks.

However, as reported by The Verge, Tinder is also currently testing a live trivia game. Early screenshots show users being asked multiple choice questions while engaging in a video chat with three other people.

A spokesperson told The Verge: “Similar to our first digital shared experience offered on Tinder, Swipe Night, we plan to bring more of these activities to Tinder in the future.

“However, these concepts are only a test and may never launch. We look forward to providing more information when it’s available.”

At the moment it’s unclear exactly how these games will translate into romantic connections, but there is a live chat present at the bottom of the screen.

Tinder CEO Elie Seidman also added in a separate statement that the new lockdown culture has been a “driving force” for innovation at the company, as the team tries to encourage virtual dates between members.

Gay dating app SCRUFF already has a live quiz feature called ‘Hosting’, which was launched last year. Players compete for cash prizes and can continue private conversations after the game has concluded.