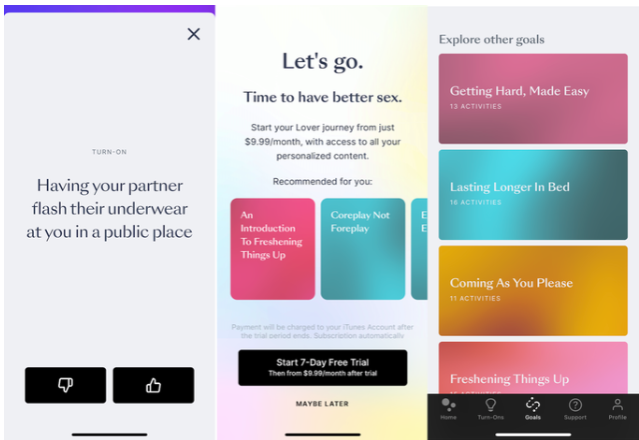 Tinder founder, Sean Rad, has funded a new app which gives tips and support to those struggling in the bedroom.

‘Lover’ provides personalised information for each user, via a Myers-Briggs style questionnaire, on ways to improve sex life and support those with sexual difficulties, such as erectile dysfunction. It aims to be a credible alternative to traditional medicine.

“It is strange that there are such taboos around sex when it is something we all do…whether we enjoy ourselves or not. We think it is time to start the conversation around this important aspect of our health,” said sex psychologist and co-founder of Lover, Dr Britney Blair to TechCrunch.

“Almost 50% of women and 40% of men have a sexual complaint . . . [but] most people don’t realise how common and treatable their issues are.”

The app launches today on iOS and the $5 million donated by Rad and other investors will go towards creating an Android version.

Users will be able to reach much of the app’s content for the first week, including audio guides to oral sex, videos on how to be generous in bed and material like “Getting Hard, Made Easy”. Following the week’s trial, users will have to pay a subscription fee of $9.99 per month or $59.99 per year.

Blair said: “It’s hard to motivate people into behavioural change, people already have subscription apps on their phones, and we may run into ‘subscription fatigue’.”

The app has also taken a quiz feature from a similar app, XConfessions, which partners can take simultaneously in order to find out what sexual preferences they have in common.

Blair first got the idea ten years ago after a grad school lecture which revealed how quickly sexual problems could be solved through communication and learning. From there, she joined forces with her then CEO, Jas Bagniewski, and Lover co-founder, Nick Pendle, both e-commerce experts, to design and promote the app.

There is the possibility that people may be put off using the app as it takes longer to see the results of psychological treatment as opposed to medicines such as Viagra, which start to work immediately.

In August 2019, Tinder co-founders Rad and Justin Mateen helped to fund an Australian startup that would support men struggling with sensitive health issues.