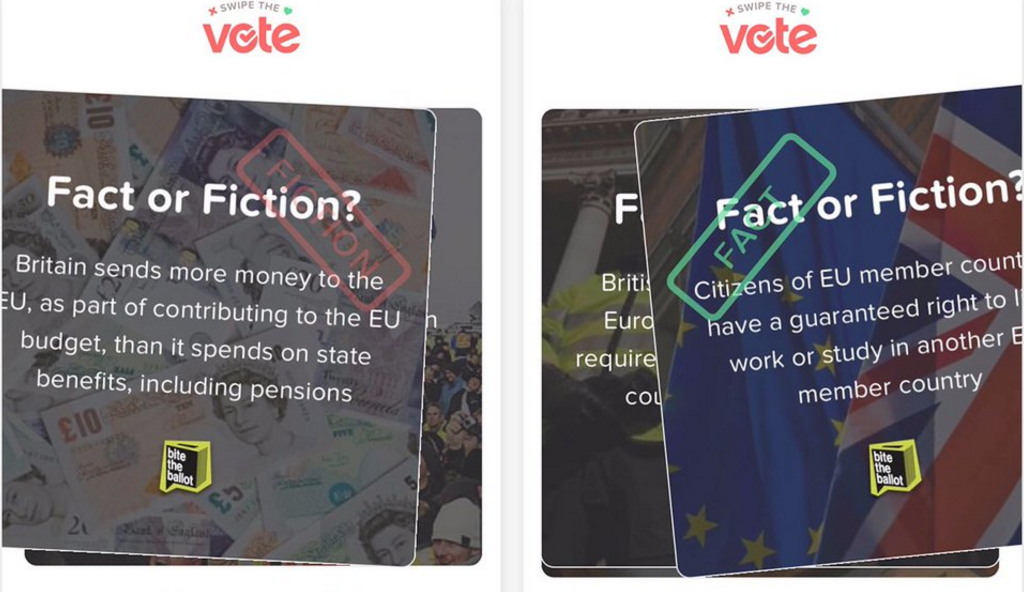 A new political campaign has launched on Tinder this week, in an effort to reach out to young British singles and encourage them to vote in the upcoming EU Referendum.

The popular dating app has teamed up with non-profit organisation Bite The Ballot, a group which aims to raise awareness about voting among young people, for its latest edition of “Swipe The Vote”, offering its UK users the chance to learn more about the important issues surrounding the vote.

When swiping through matches, UK users will now come across a screen asking them to take part in an in-app game which will test their knowledge on the nation’s involvement in the European Union.

During the quiz, users are presented with a number of statements based on a range of key issues, which according to the app, range from state benefits to human rights.

For example, one of the statements used in the game reads: “Only Britain and EU member countries have protected human rights under the European Convention on Human Rights.” Users are then given the the option to swipe on each card to show whether they think the statement is true, swiping right for “fact”, and left for “fiction”.

After answering a few questions, Tinder then reveal how well they scored, giving them the option to share their findings on social media, or learn more about the Referendum.

Additionally, Tinder will also give participants a direct link through to the site where they can register to vote.

Earlier this year, Tinder launched a very similar campaign in the US, which aimed to engage its millions of American users with politics by helping them find their perfect political match.

The game allows US users to swipe through 10 important issues and debates surrounding the nation’s politics, after which the app matched singles to the candidate that best matches their views.

Find out more about the previous campaign here.