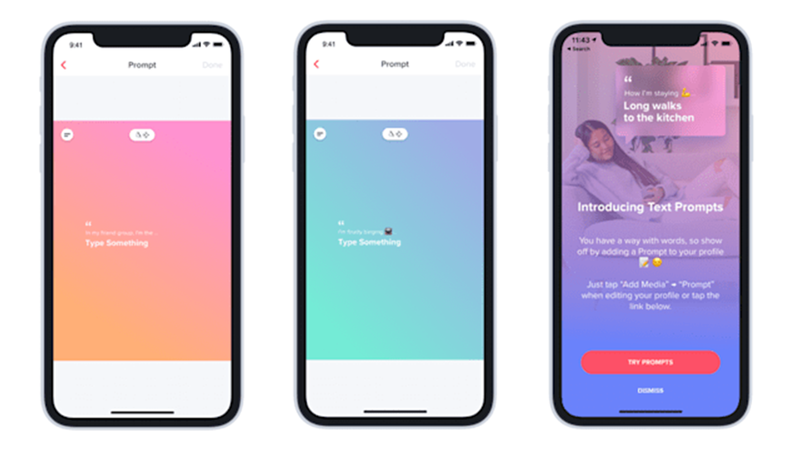 Tinder has added a new feature to profiles called ‘Prompts’, to help its community easily start conversations with their new matches.

Users can type honest answers to pre-written questions and display them alongside their profile pictures. It’s hoped that the extra insight into their personality will lead to more creative icebreakers and people connecting over their shared interests.

According to Tech Advisor, a Tinder spokesperson explained: “Writing the perfect bio can be nerve-wracking, so Tinder has introduced a way to share bite-sized glimpses into your personality that can also be great conversation starters.”

Initial questions include “I’m finally binging…”, “I’m talking to my pet about…” and “The one thing I won’t take for granted again is…”.

New prompts will be rolled out on a weekly basis and if users don’t like the ones that have been suggested, they can press the dice button to receive another random one.

The feature, which is already available on several other dating apps like Hinge and Bumble, was confirmed by Tinder in February. It was originally uncovered by reverse engineer Jane Manchung Wong, who also suggested that another ‘Share to Matches’ update was in the works.

This would allow singles to post photo and video ‘Stories’ that only their matches can see.

Last week, Tinder confirmed its ‘Global Mode’ is going to begin testing soon. The free feature, which is similar to the premium ‘Passport’, will make dating profiles visible all over the world.