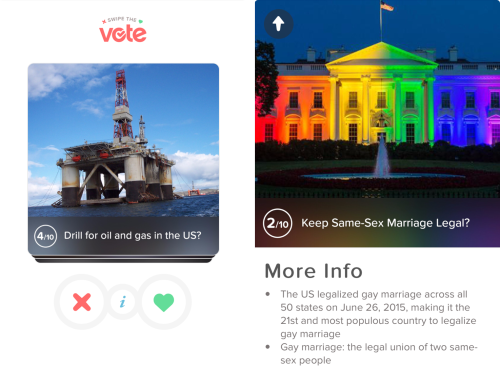 Last week, Tinder added a new in-app game called Swipe the Vote to the dating app, designed to engage singles with politics by matching them up with their perfect presidential candidate.

To do this, Tinder partnered with Rock the Vote and added profile cards to the app, which when clicked, enter users into an issue-based poll.

And since launching the feature last week, Tinder has now revealed the early results of the poll, and who its users’ favourite candidates are on both sides of the political spectrum.

On the Democrat side, Bernie Sanders was the leading choice, matching with 37.8% of swipers, narrowly defeating rival Hillary Clinton who took 37.6% of the vote – Sanders edging in front by just 200 votes.

For the Republicans, Texas senator Ted Cruz was the clear winner, taking 14.3% of overall votes, beating inflammatory rival Donald Trump, who took just 8.1% of the vote. However the men of Tinder did lean far more to the right, matching nearly twice as often with the Republican candidates than female voters.

Tinder found that almost 20% of men swiped their way to a match with Ted Cruz, compared to only 8.5% of women.

And regarding state by state results – Hillary actually won the most states, even though Bernie took the majority of the popular vote.

Tinder said the in-app poll would remain on the app this presidential season, with new results released over the coming months.

Check out the full results below: