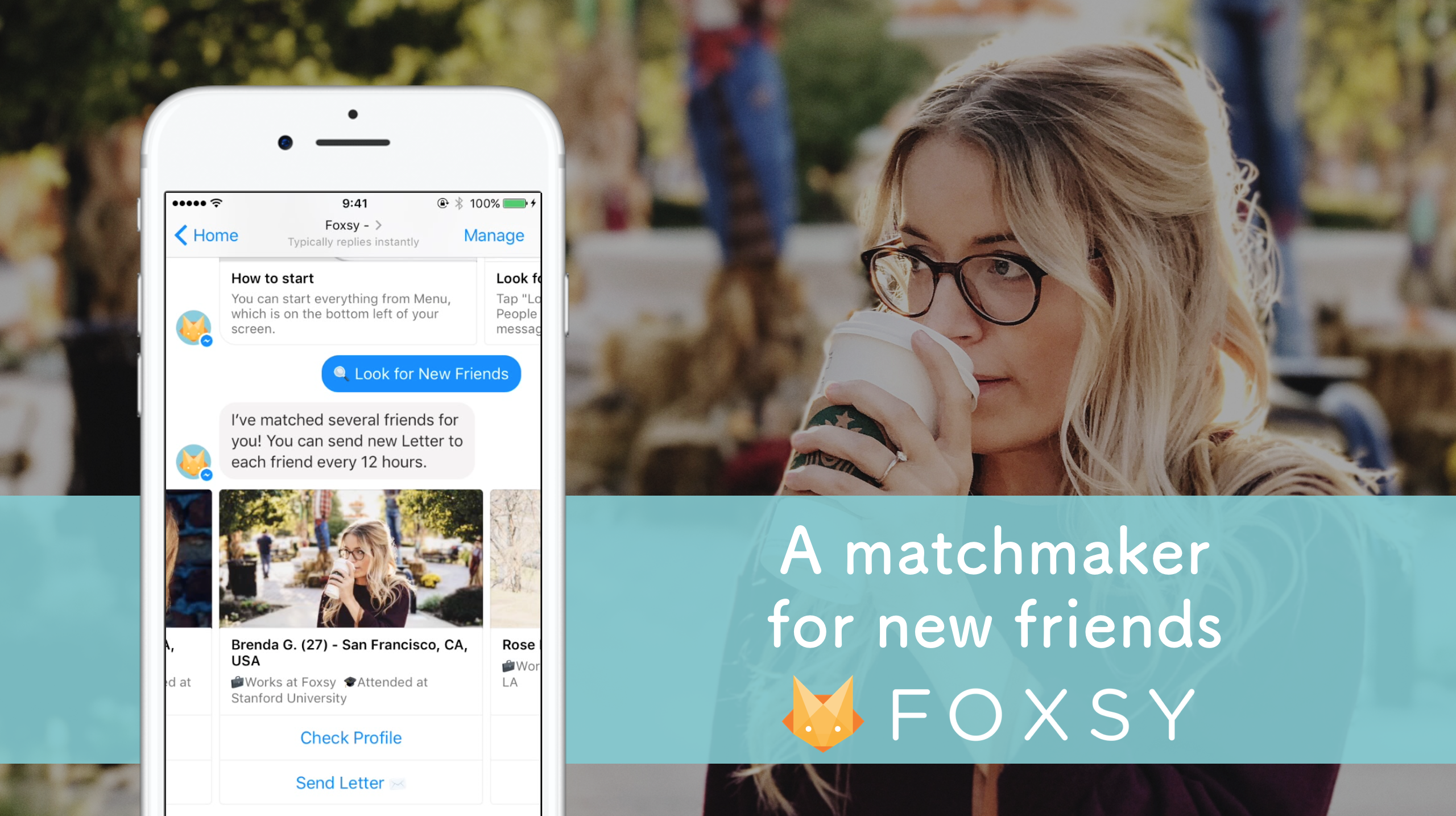 At the start of the year, a new awards for the emerging chatbot industry named matchmaking bot Foxsy the best social chatbot of 2016.

Foxsy is a chatbot for Facebook Messenger that introduces you to new people for both dating and social purposes, sending quick intro messages for you, and setting up a private chat if your interest is reciprocated.

First launched last June, Foxsy debuted as a dating matchmaker, but has since expanded into the social sphere, as it looks to bring its matching service to a broader range of messenger platforms.

In January, Foxsy was named among the top chatbots of 2016 by chatbot search engine ChatBottle, having been named to the shortlist of 35 by industry experts.

Voted for by over 2,500 people in 65 countries, Foxsy sat alongside other winners like tech news brand TechCrunch, daily decisions bot Swelly and productivity chatbot Meekan.

As illustrated in the video below, Foxsy acts as an introduction agent for users, first showing a selection of potential matches nearby, sending an introduction note – called a Letter – to anyone that catches your eye, and putting you in contact if they decide to accept the Letter.

GDI recently caught up with the founder of Foxsy, Jin Tanaka, to talk about the matchmaking tool, and why he sees chatbots as such a good fit for the world of online dating and social matchmaking.

See an edited version of the conversation below.

Can you explain how Foxsy works?

Foxsy is a matchmaker for new friends. It will work with all messenger systems for cross-platform services in the future. Based on their information and interests, users can get suggestions about who they might be interested in chatting with. After getting a suggestion, users can send a message – which we call a Letter – and they decide if they want to talk to someone, based on the personal information provided.

Who do you match with and where does the pool of matches come from?

Foxsy suggests the right people to chat to based on similar interests and location. Once a user accepts their Letter, which is the way to approach and express an interest in someone, they can privately chat with each other. We even implemented an emotional recognition into the Letter function that recognises when users include a negative word in the message, and won’t allow them to send it.

How did the idea for Foxsy come about?

The original idea came from Cappuccino, which is a native iOS app. Nowadays, we get connected with a lot of people and new friends. Nevertheless, once you connect with someone, you most likely won’t connect with them again, as it’s often sufficient to be a social network friend. However, we might be missing the opportunity to get close to someone. Why did you want to build Foxsy?

What is appealing to you about using chatbots for online dating?

Since we started to work in the bot space, building bots and testing them, we generated a lot of great insights. For example, the chat interface enables services to collect a lot of useful personal information from users, but only if the bots are good enough to collect and use it. And although the space is still immature, chatbots could also be used to bring a more personalised experience to users, by further integrating AI and machine learning.

Do you think chatbots will be an important trend for online dating over the coming years, and if so why?

Yes, I totally agree with this – people like to meet other people, but they are so busy in their daily lives. At the same time, they have a smartphone and they are nearly always chatting with someone. Meeting new people is based on coincidence and chemistry, like when your friends introduce you to someone great, but we think you can engineer and replicate this in better ways.

What are some of the problems with modern dating apps? How does Foxsy aim to offer a remedy to these issues?

As we tested our chatbots, and interviewed online dating users, we discovered two main problems. Firstly, most dating or matching services have a lack of personal information about each user, which means singles can’t decide or figure out if they are worth chatting to or not. Secondly, many of the approaches on dating apps are not appropriate. Although everyone wants to chat, talk and get to know one another, many daters just send random messages to other users that can sometimes be impolite or even inappropriate.

Do you have plans to monetise?

Yes, we are planning to do that. We will provide a subscription business model, as well as selling Letters as a virtual item.

You recently won the social category at the ChatBottle Awards. Can you tell us a little about this and how you hope it will impact Foxsy?

Yes, it is definitely helpful for us. I still think bots are under appreciated by the public, and I think those within the bot industry should collaborate together to build a movement to help bring chatbots into the mass market. So, having the backing of a third party like the ChatBottle Awards could help us connect with other great bot makers who also won awards, such as ChatFuel, Swelly, Betaworks, Daxter and Hi Poncho, which was introduced by Mark Zuckerberg at last year’s F8 conference.

What are your plans for the rest of the year?

Firstly, we are building Foxsy for other platforms as we evolve it from a matchmaking bot for dating to also being a matchmaking tool for new friends. We will also expand Foxsy as much as possible, looking to get the tool featured by platforms like Facebook, Viber, Kik, Telegram and Slack. We are also working on a seed round investment, looking for investors that have the same passion as us, so we can work together to improve the way people connect together using Foxsy.

Find out more about Foxsy here and read about the ChatBottle Awards here.