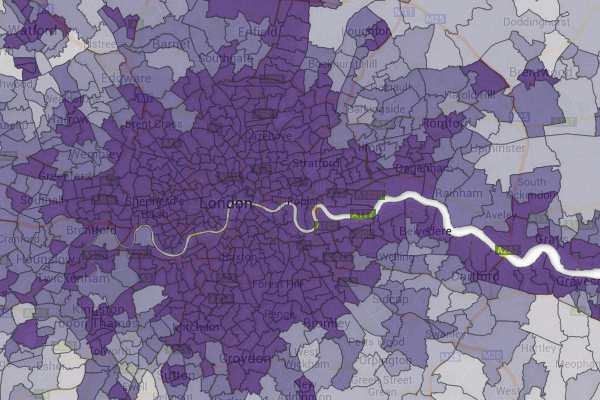 The UK Office of National Statistics has released an interactive map of the country that shows the number of single people per area.

According to data from the ONS, the number of single people in the UK has risen by three million in the last 10 years.

The ONS said: “The majority of the top 10 local authorities with the highest proportions of those who were either never married or unmarried were in London.

“Oxford, for example, appeared in the top 10 for both groups.”

The area with most single people was the London borough of Islington, with 63% of men and 57% of women classed as single.

Some other London boroughs had very high percentages of singletons – Tower Hamlets, Fulham, Hackney and Camden all with percentages over 50%.

Other cities with a high ratio of singles were Manchester, Cambridge and Oxford.

See the map below – the darker areas showing the highest percentages of singles.

The ONS concluded: “The rise in the single population could be the result of a number of factors, including the proportional decline in marriage since the 1970s and the increased social acceptability of remaining single or cohabiting, either never marrying or not re-marrying following divorce or widowhood.”

The lowest percentages of single men and women were found in East Dorset, with 24% of men and 18% of women classifying themselves as singles.

Other areas with low percentages of single men were North Kesteven in the East Midlands, South Northampton and Christchurch, and the lowest percentages of female singles were seen in Richmondshire, East Devon and Hambleton in North Yorkshire.