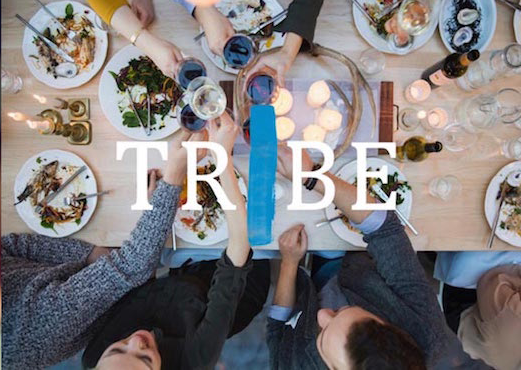 This is a guest article by Emma Forsyth, founder of Tribe London.

Part 1: How Tribe was set up
Part 2: Starting out in the dating industry

Part 1: How Tribe was set up

In an effort to answer both these questions, most of us plough through lists of new pop-ups, private members clubs and playhouses, whilst simultaneously app-shopping for lovers on late night commutes. It’s made being proactively single feel like a second job and the results aren’t great.

We’ve all spent hours swiping, liking and crushing in an effort to find someone ‘normal’ (that rare guy that doesn’t send you a graphic close up at 1am) only to awkwardly queue together for 50 minutes to endure bad service and an ok burger at some ‘amazing’ new pop-up.

I mean seriously! It has to be easier, more natural and, most importantly, more fun than this. We live in one of the most vibrant cities in the world with a smorgasbord of singles from every corner of the planet. Being unattached shouldn’t mean piles of digital life admin, it should be enjoyable!

In an effort to make it so, I threw the question out there: ‘what is the perfect way to meet someone new?’

Given the current world of online dating I worried that the response would be the need for a bible of digital information, love algorithms and multiple profile photos. However, an overwhelming number felt exhausted and gave a deep sigh,“I just want my group of mates to bump into another group of mates down the pub and take it from there, you know, like we used to!”.

The problem is that introducing yourself in a bar just doesn’t happen any more. We’d rather ‘swipe and see’ then put ourselves out there. As a result our respondents wanted something that encouraged them to introduce themselves. More simply put, they wanted help getting a real life conversation started.

To do this I looked at the problem from two angles.
1) I wanted to diminish the awkwardness of making a move and
2) I wanted to create an atmosphere primed for positive natural interaction.

To deal with the awkwardness I looked into the idea of ‘my mates meeting your mates’ and the broader idea of group dating where I discovered three core reasons for it’s established appeal.

Next was atmosphere.. We recently found that 74% of women and 70% of men thought that shared interests are the most important qualities when choosing a partner. It’s imperative that both parties have something to talk about and helps people to feel understood and listened too, both of which create a more relaxed environment where you can bond more freely.

The combination of group dating through shared interests felt like the right way to drive real life interactions and this formed the basis for Tribe London.

We’re a new way to date for social, cultural and unattached Londoners. We’ve created luxury experiences and have partnered with some of the city’s top creative, culinary and cultural experiences to produce luxury group dates that cover a spectrum of interests. Be it classes, sports, food or drinks. Members simply chose the experience they’re interested in and then enjoy it as two groups of three single friends.

The final test was to ask why they might choose Tribe over other dating services. Both current online dating users and non-users said that they felt dating apps and sites were mainly full of weirdoes, despite being on them themselves. The whole process made them feel like they looked desperate, where as if they were already out, doing something cool and met someone, it would be a lot easier.

We’re still starting out and it’s happening slowly but the concept is already proving itself with client testimonials like “I’ve never had so much fun being single” and we have one couple on their third date, who we’ve been with since the start.

Part 2: Starting out in the dating industry

Starting out on any new venture is terrifying, in a good way. I firmly believe that if it’s not simultaneously giving you butterflies whilst also making you want to throw up then it’s probably not worth doing.

That said, starting a new dating venture has felt the most daunting. Mainly because everyone has an opinion. It’s not like we’re selling complex pieces of tech where the product is predominantly over our customer’s heads, with dating we’re trying to bend the rules of a game the whole world has been happily playing for years. Additionally, it’s an extremely high stakes game in which each player views ‘winning’ in a different way.

Given all that, to counteract the ridiculous decision to go all in on a dating start up I prescribe listening, friends and a huge pair of balls.

Listen
You need to listen because learning is everything. Whether it’s new research, hearing tales from your single mate after her fourth cosmo or frantically note taking insights from industry experts. Getting a mix of opinions is hugely helpful when it comes to sense checking your product and keeping on top of new trends. Always keep your ears open but remember to keep your eyes on the prize too. Don’t make rash changes in direction because of every little comment, use what you’ve learnt to build on the bigger picture and then make the call.

Friends
You need friends. Old ones to support you emotionally, and new ones who actually know how to help. Creating and growing relationships with build partners, clients and other start-ups is crucial. It’s a lonely road running your own business and you need people to fight with you. Confidence, honesty and passion attract all the right people to your cause. Say yes when they offer help and always help in return.

Balls
And finally you need a massive pair of balls because it’s going to be tough. Going somewhere new and asking people to follow you is hard and, in all likelihood, they won’t for a while. You need to be able to hack out a new path and then stand at the middle of it, alone, and keep asking until they do.

Once you have your foundations in place it’s time to build the business. My three top tips for building a dating start up are:

– Prior Preparation and Planning. Before you start anything you need Plan B & C already in mind. If it’s all or nothing then it’s a higher risk then you need to take so think about two ways your concept could shift if its original iteration doesn’t work. Plan to fail then lock it away, ignore it completely, and only break the glass encase of an emergency.

– Branding. I would say this, as an ex-advertising executive, but branding is the first feel anyone will have for your business. Get your brand set, and make your marketing materials as slick as possible. It’s the easiest way to help people say yes. Yes to funding, yes to signing up and yes to spreading the word too.

– Solid Flexibility. Try new things. New ways of advertising, new offers, new iterations of your idea. Say yes, be brave and go for it. Just keep in mind the core of your business, why you started doing it in the first place and, no matter what, stay true to your mission statement. That way any new things you try will just be another way of bringing it home.

So if you’re thinking of throwing your hat into the ring go for it! The dating industry is a vibrant and ever changing mix of answers to the biggest of all human questions. So no matter how daunting it might be, dating will always be an industry that’s exciting and hugely worthwhile being a part of.

Emma is the founder of Tribe, “the new and effortless way to date for those who are independent, unattached and living in London.”