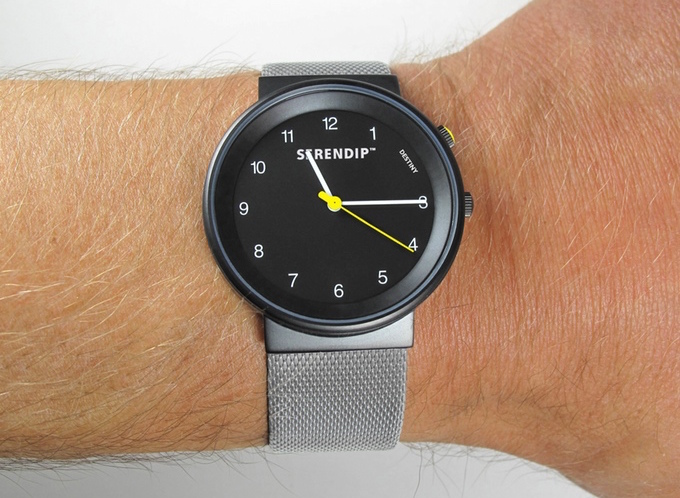 A Swedish inventor wants to add a touch of serendipity back into dating, by creating an affordable watch that notifies singles if they pass their perfect match.

Called Serendip, the individually programmed wristwatches communicate with one another through radio waves, and vibrate if someone who matches your personality passes by.

As the company says: “On dating apps like OkCupid, POF, and Tinder we search high and low for that special someone. Because we know they are out there. Somewhere. We just have to find them. But while we search we’re forgetting about the best match maker in the history of the universe: Destiny.”

Before wearing the watch – which charges via USB – singles undergo a custom personality test, the details of which are programmed to the watch. The idea comes from Swedish inventor and author Fredrik Colting, who has created a Kickstarter campaign to help fund the project.

Colting previously created a watch called Tikker, which calculates your life expectancy based on your lifestyle.

The LA-based inventor said: “Every single person I know is searching for love. But dating sites give you the sense of shopping for a new partner. I wanted to get away from that. I mean, we are talking about people here, not shoes. I wanted to find a way where we could let destiny have a bigger part in finding the love of our lives.

“Don’t get me wrong, I think online technology and social media is great. But meeting someone because you are in the right place, at the right time… there’s something special about that. Something romantic. And I think everyone should be able to star in their own romantic movie. And with the Serendip they can.”

Obviously one of the problems with the idea is you need lots of people to be wearing the watch, before you have a chance of meeting your perfect match.

Colting explains how the company would get around this issue – by creating collaborations with current dating sites, organising branded dating clubs, along with sponsoring huge sporting and music events.

The Serendip founder also said he wanted to make an affordable watch rather than creating an app, or tailoring the app for an expensive smartwatch, because he believes “a device that does one thing, and does it good, is not only technologically superior, but it also has a greater symbolic value.”

The team are looking to build the watch by raising money on Kickstarter, which will go to funding tooling and mechanical costs, large component orders along with assembly and testing costs.

Check out the Serendip website here, and the Kickstarter campaign here.