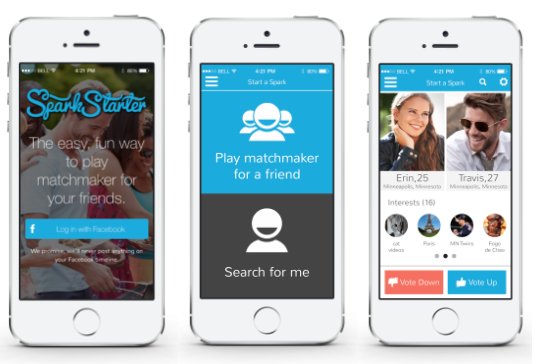 The Minneapolis-based app lets both singles and those in a relationship play the dating game.

SparkStarter finds you matches who have similar interests — based on your Facebook information and likes — from your Facebook network and friends-of-friends.

After choosing whether you are searching for love or helping a friend, the app shows you various profiles which you vote on.

Depending on the votes of singles, and their matchmaking friends, the compatibility rating of each potential match changes.

And the app, which launched at the start of February, has now hit 150,000 downloads, with over 25m user profiles available through the friend network.

The CEO and founder of SparkStarter, Tony Kramer said: “I attribute much of our early success to people loving the concept of playing digital matchmaker. We’ve already had relationships start and it’s encouraging to see that 54 percent of our users are playing matchmaker for friends.

“We’ve had several users mention they wouldn’t have thought of setting up two of their friends until seeing them as a match in the app.”

SparkStarter has received $500,000 in angel funding so far, with more investment expected in coming rounds.

The app is available on iTunes and Google Play, with a desktop site coming in the next few weeks.