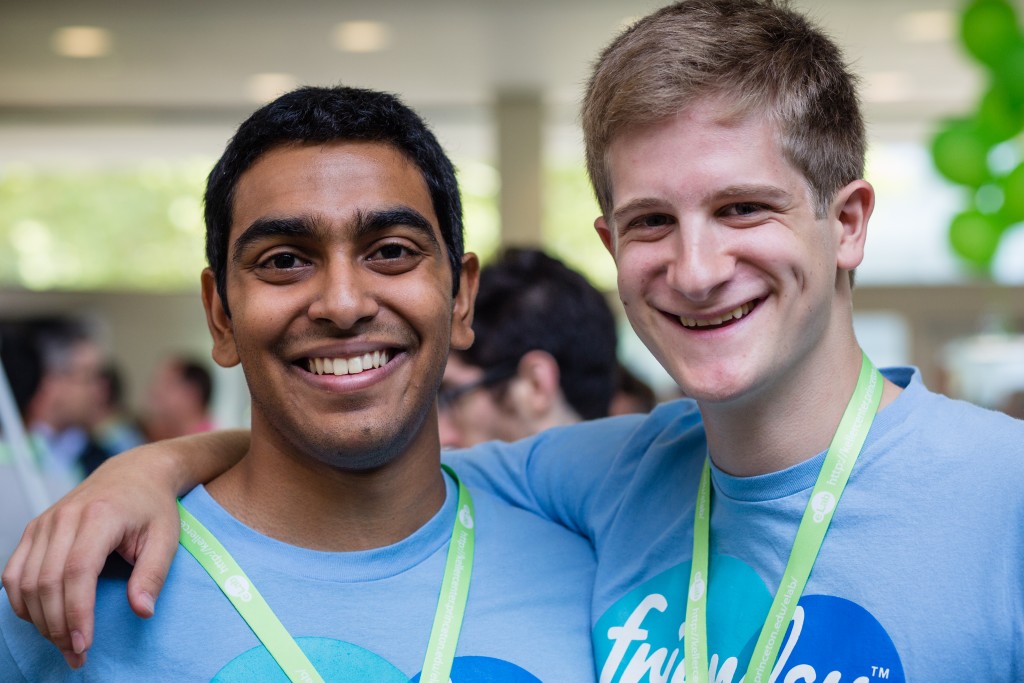 Name: Michael Pinsky
Position within company: Co-founder, COO of Friendsy
Period of time in the role: Since the beginning!
Twitter: @friendsyapp

When Vaidhy and I were freshmen, we met by randomly sitting down on adjacent couches in the student center to watch a Yankee game. We started talking and quickly became good friends, but we realised that too often it doesn’t work like that on college campuses, and people get stuck inside their social circles. We wanted to make an easier way for people to branch out and take better advantage of the amazing people on campus, so Friendsy was born.

Where did you get the idea for Friendsy?

One of the great things about Friendsy is that because it is contained to only college students, it’s an incredibly relevant platform for them. Our age demographic of Facebook users is seeing a decline in activity, because 95% of what we see in our newsfeeds now is nonsense, and it really doesn’t cater to us anymore. Friendsy is a place for college students to be college students on an app.

How many colleges are you currently live in?

We are live all across the country! Anybody with a .edu email address in America can download the app and create an account. So far we’ve “unlocked” over 150 schools, meaning we have 50+ users at each of them.

How many users do you have? Which college has the most users?

We have about 67,000 users. Our highest number is at University of Michigan. Do you have any plans to expand to international colleges and universities, or connect with students studying abroad?

We would love to involve international colleges. The first step is to dominate the American college scene, but international expansion is intriguing for sure. As of now, students at U.S. universities but studying abroad can still use the app just like any other student with a .edu email address.

Which specific features of your app have proved most popular with your users?

People love swiping through profiles to make mutual matches, and people love ChitChatting, a randomized, anonymous chatting feature where users can have a text based conversation and become mutual friends only if they both think the conversation is going super well.

Many dating apps have problems “Catfishing” and spam profiles. How does Friendsy ensure that its users are interacting with real people?

Friendsy doesn’t have any strangers or any bots, and we keep our network incredibly safe and secure by limiting our user base to only those with .edu email addresses. Nobody can create a program to make a zillion Facebook accounts and sign up for Friendsy with those accounts.

What is currently the biggest problem for college students who use dating apps?

I think one of the biggest issues is that most romantic apps feel so fake. Many are binary constructions where you swipe right or swipe left or indicate hot or not in some way, but we wanted to fill in the gray area of how relationships work in real life. Plus, the idea of meeting up with a mutual Friendsy match is much more real than meeting up with a Tinder match because you know the match is a real college student, just like you, and you can take a quick walk over to their dorm. With graduation right around the corner, how do you plan to keep growing Friendsy once you’ve graduated from Princeton?

What has been your marketing strategy?

Thus far we’ve done a lot of pulling on whatever resources we could find. We really haven’t put much money behind our marketing at all, so it’s really been very grassroots and organic.

Did you raise any funding for Friendsy?

We started off with an Indiegogo campaign to get us off the ground. The next step was participating in Princeton’s eLab accelerator program last summer. And we also raised an angel round with private investors in NYC last fall. In total we’ve raised a bit over $200,000.

Do you have plans to monetise Friendsy?

Monetisation is something we always keep in mind but have left on the backburner. Our mission right now is to create a viral product that college students absolutely love and grow our user base from that love.