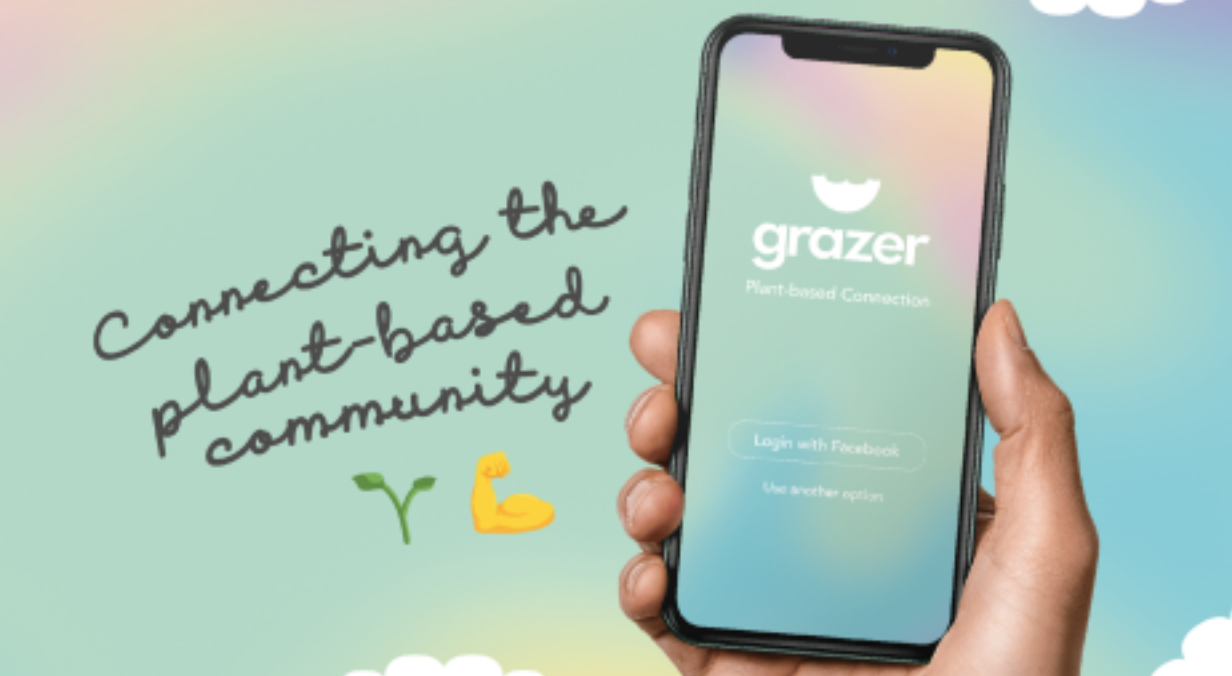 Grazer has launched it’s equity crowdfunding campaign on Seedrs last week and went into over funding within 24 hours. With over 400k already committed to the round, now the campaign is in overfunding. Grazer’s campaign is still open to give people interested in a plant-based future the chance to invest and own part of Grazer!

Equity crowdfunding gives the public an opportunity to invest in an unlisted company in exchange for shares in that company. With the dating app sector set to grow by £3.4b by 2025 and 25% of Brits projected to become vegan or vegetarian by the same year, Grazer co-founders Lewis and Charlotte are taking plant-based connection to a new level by opening their fundraising to the community they love.

Being part of the vegan community themselves, Lewis Foster and Charlotte Elizabeth have witnessed and experienced how hard it can be to find a vegan partner.

The funds raised will be used predominantly on their marketing efforts, to accelerate the growth of Grazer and help connect the plant-based movement across the world.

With 52% of vegans and 39% of vegetarians saying they would not date a meat-eater, Grazer is the plant-based connection app, set to conquer the dating world, one meatless match at a time.

Charlotte Elizabeth, co-founder, said: ‘If you’re single and vegan, you’ll likely have to navigate through mainstream dating apps, where 41% of online daters are put off when someone mentions the word vegan on their profile. Grazer provides a space where ‘vegan’ comes as standard, not a surprise.”

The plant-based movement is growing rapidly across the world especially with GenZ who is the most plant-based generation ever. 20% of Gen Z in the UK are now meat-free and a further 26% planned to go meat-free in 2021. Grazer is here to represent the new wave of veganism and move past the outdated stereotypes.

Charlotte says: “Veganism is not a fad, we think it’s a permanent social movement that will define our generation. Grazer is more than a niche app, we see it as a brand that will push into the mainstream and establish itself as part of popular culture.”

Lewis and Charlotte think Grazer can help change the world. Lewis says “We see Grazer as being the connector for the growing plant-based community. We believe we have a vital role to play in accelerating the growth of veganism, by uniting and empowering the movement across the world. By investing in Grazer you can be part of the revolution and help us connect the new-wave of plant-pioneers.”

More than just a dating app, 20% of Grazer’s users are using it’s friend-finding feature. Grazer describes itself as a networking hub – connecting the consciously like-minded through meat-less matches.

The duo is raising Seed investment via Seedrs to take the innovative dating app to the next level and have opened the round to the equity crowdfunding platform Seedrs.

The Seedrs campaign is now open to the public here.