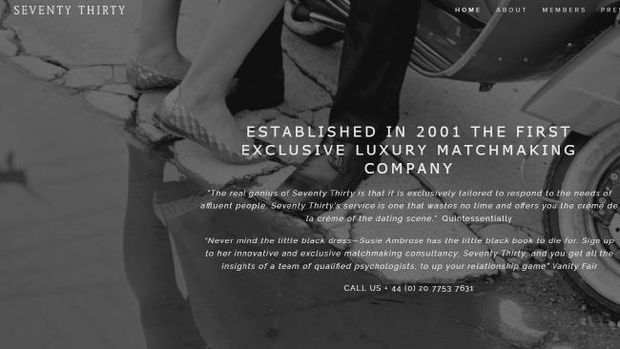 Premium dating agency Seventy Thirty has been made to repay £12,600 to Tereza Burki, 47, who failed to find a match via the service.

Judge Richard Parkes QC ruled that Seventy Thirty had been deceptive in its marketing, suggesting that it had far more high quality bachelors in its network than was actually the case.

Then Managing Director Lemarc Thomas had promised singles “a substantial number” of suitors. The agency claimed to have over 7,000 members.

The judge said: “My conclusion from the evidence is that there are at the very most perhaps 200 active members of Seventy Thirty, and probably fewer.

“That points to a maximum of around 100 active male members.

“A membership of 100 active men cannot by any stretch of the imagination be described as a substantial number.”

He added: “The representations made by Mr Thomas were therefore false and misleading.

“Had Ms Burki known what the true size of the active membership was, she would not have joined Seventy Thirty.”

Burki was also given £500 for the negative emotional impact of the saga, but had to pay £5,000 in libel damages after submitting a Google review which described Seventy Thirty as a “scam”.

In a statement, the agency said: “We would like to reassure and remind our clients – both prospective and current – that Seventy Thirty has been in business since  2001 and its team of psychologists and matchmakers have developed a dating model with a great deal of success.

“To date, we’ve been responsible for matching over six thousand individuals who have, on the basis of an introduction facilitated by Seventy Thirty, gone on to have long-lasting relationships. Moreover, sixty-three children have been born as a result of our introductions. We are incredibly proud of the service we provide and our very many happy clients.”