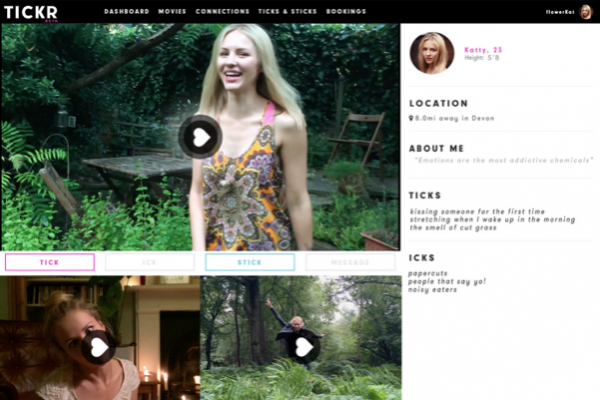 Tickr is a new dating site that uses short Vine-style videos rather than the standard profile picture.

The videos can be up to 20 seconds, and Tickr wants them to do away with “mindless swiping right or left based on looks and airbrushed photos”.

Users can either upload videos they’ve already taken, or record new ones that detail their interests and hobbies.

If other singles like their videos, they choose whether to “tick” or “ick” their profile, then like Tinder if both mutually tick each other, they can chat or video message.

London-based Tickr is current available on desktop, with an iOS app coming in October.

Daniel Freeman from Tickr said: “The dating scene can be a treacherous one — with apps promising the flame of romance but leaving you with a damp squib, to sites playing cupid that leave you cold.

“Unlike other sites or apps where you can lose a perfect match at the slip of a finger, Tickr allows its users to hit it off quicker with profiles that move — giving you the chance to really get to know your match. It’s the next best thing to meeting in person.”

The company have also linked up with restaurant site Bookatable, to help users plan a date.

Tickr have offered a free lifetime membership to the first 5,000 signups to the app, and after this, subscription fees will be £10/month.