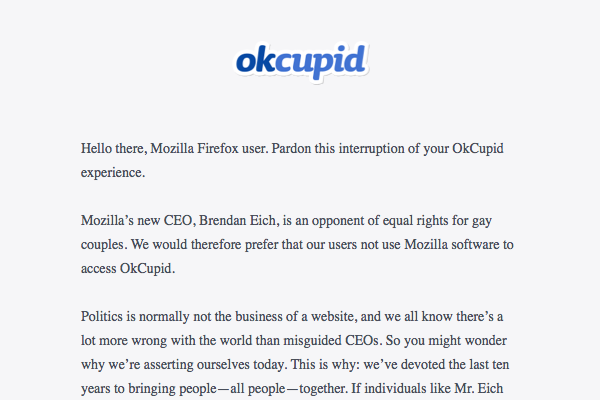 OkCupid is urging their users to boycott the Firefox web browser because their new CEO opposes gay marriage.

Users accessing the dating site on Firefox are met with a message that says those who “deny love and instead enforce misery, shame, and frustration are our enemies”, and calls for users to switch to a different browser.

This is because of a $1,000 donation Brendan Eich, the new CEO of Mozilla – the company who make Firefox – made in 2008 in support of California’s Proposition 8, an initiative to ban gay marriage.

Following the message, OkCupid provide links to four different web browsers, and one that lets users continue through to the dating site on Firefox.

“We are sad to think that any OkCupid page loads would even indirectly contribute towards the success of an individual who supported Prop 8–and who for all we know would support it again.

“We wish Mozilla’s institutional commitment to freedom and openness were better reflected by their choice of leadership.”

Eich was appointed CEO on the 24th of March, a decision which has led to many board members resigning from the company.

Hello there, Mozilla Firefox user. Pardon this interruption of your OkCupid experience.

Mozilla’s new CEO, Brendan Eich, is an opponent of equal rights for gay couples. We would therefore prefer that our users not use Mozilla software to access OkCupid.

Politics is normally not the business of a website, and we all know there’s a lot more wrong with the world than misguided CEOs. So you might wonder why we’re asserting ourselves today. This is why: we’ve devoted the last ten years to bringing people–all people–together. If individuals like Mr. Eich had their way, then roughly 8% of the relationships we’ve worked so hard to bring about would be illegal. Equality for gay relationships is personally important to many of us here at OkCupid. But it’s professionally important to the entire company. OkCupid is for creating love. Those who seek to deny love and instead enforce misery, shame, and frustration are our enemies, and we wish them nothing but failure.

If you want to keep using Firefox, the link at the bottom will take you through to the site.

However, we urge you to consider different software for accessing OkCupid.

A Mozilla spokesperson has since issued the following statement: “Mozilla supports equality for all, including marriage equality for LGBT couples. No matter who you are or who you love, everyone deserves the same rights and to be treated equally. OkCupid never reached out to us to let us know of their intentions, nor to confirm facts.”