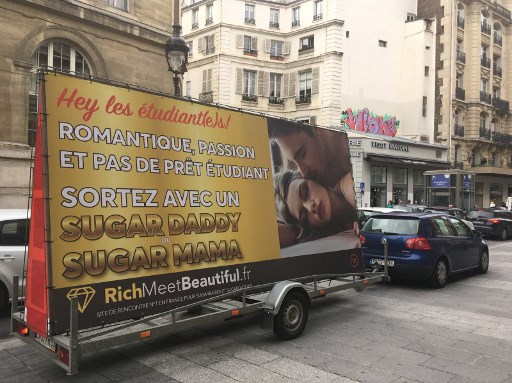 Sigurd Vedal, the 57-year-old founder of sugar dating service RichMeetBeautiful.com, appeared in Belgian court yesterday after being accused of “incitement to debauchery and prostitution”.

A branded truck was seized by local police in 2017 after complaints from the Free University of Brussels. Hoardings on the side of vehicle featured a scantily-clad woman, and a slogan which read “Hey female students, improve your lifestyle, go out with a Sugar Daddy.”

The site has used similar mobile billboards to target a range of university campuses in Europe.

Prosecutors are seeking a six-month suspended sentence and €40,000 fine for Vedal, as well as a further €250,000 fine for RichMeetBeatiful.com parent Digisec Media. The court will decide on Wednesday 8th May.

Defence lawyer Eric Cusas made the case that: “This digital entrepreneur simply wants to run a dating site, he’s not an accountant of carnal desires.”

Vedal’s position was that he encouraged dates which were “out of the ordinary”. This argument was found to be “hypocritical” by the state prosecutor.

She said: “Even if weasel words were used, everyone knew what it was about. (…) There are half-dressed women on the site, there are no photos of couples in a restaurant. (…) Students are reduced to sex objects that must undress for money.”

RichMeetBeatuiful.com’s founder is also under investigation for “aggravated pimping” in France. The French version of the site reads: “Get the respect and admiration you deserve from young women eager to learn from an established mentor.”

In October, Global Dating Insights spoke to Sugarbook CEO Darren Chan about his business model and some of the legal questions it raised.

“Sugar dating is a chosen lifestyle, not a profession – All 200,000 members in Sugarbook are not employed by us in any way. These are real people in search for love, companionship and the finer things in life.”