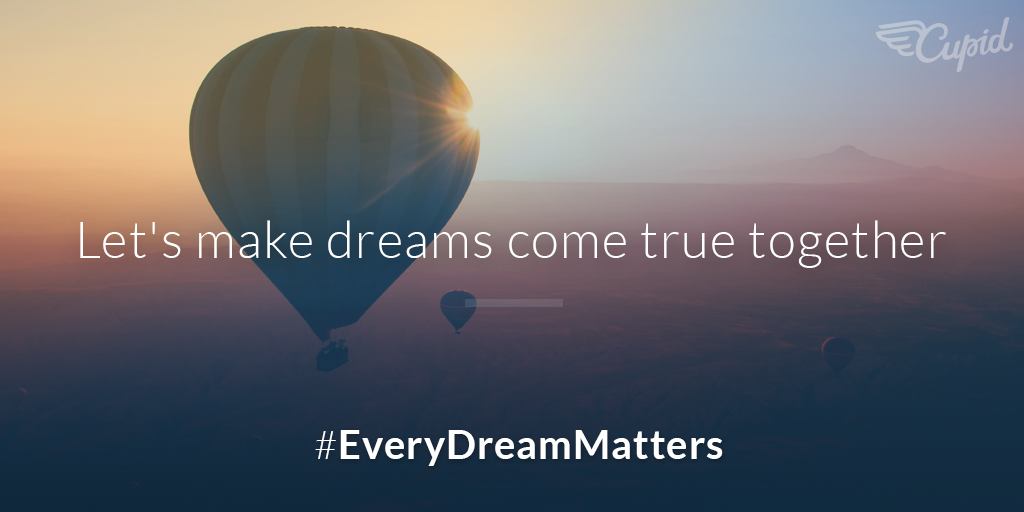 Called #EveryDreamMatters, the initiative is challenging businesses to bring dreams to life and declare they are willing to take part in the campaign within 24 hours of being nominated.

From here, they have one week to present the dream they are making a reality, before sharing the outcome online using the hashtag #EveryDreamMatters.

And just as with campaigns like the Ice Bucket Challenge, each person nominated is then asked to name two more companies to join in, by nominating them in their acceptance tweet.

Cupid.com explains the idea behind the campaign: “There are about 28 million small businesses and 18 thousand large firms only in the US.

“Can you imagine how many businesses exist in the world? What if every business fulfilled the wish of one person? How much happiness, delight, and genuine smiles would that bring?

“We at Cupid.com believe that every dream, even the smallest, matters, and is worth making come true.

“That’s why we decided to start the #EveryDreamMatters challenge and appeal to small and large companies to help bring wishes to life.”

Yesterday, Cupid.com started the ball rolling by posting their video of Julie, whose dream was to take her son to Anfield to see Liverpool play.

Having told Cupid.com of her dream, the company presented her with season tickets for her and her son, who are seen going to their first Liverpool match at Anfield together in the video.

Cupid.com has now passed the baton on to Happn and Coffee Meets Bagel, who were tweeted with their nominations yesterday.

Tatiana Mikhalchuk, the Communications Manager of Cupid.com, said: “We know that both companies care a lot about society through organising initiatives aimed to help people.”

“That’s why they were picked as the first two companies to be invited to participate in this social initiative that is going to bring a lot of happiness into people’s lives.”

To find out more about the initiative please click here.