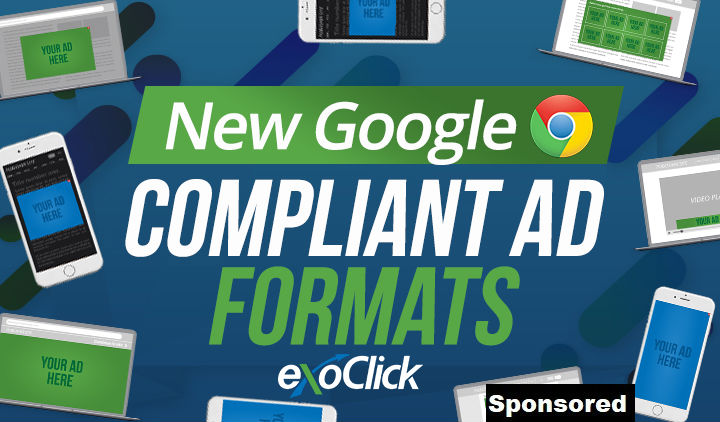 ExoClick has recently announced that it has launched a set of new Google compliant ad formats.

A year ago, ExoClick launched its Native ad widget for display, and now there are two additional formats that have been made available related to this response ad format.

The first format is Desktop Native Interstitial, which overlays the page with contextually relevant ads and appears as a smooth transition from the side of the page.

The second format is Desktop Native Exit, which triggers when the user moves the mouse outside the page when the user is going to exit the site.

ExoClick has also created new Interstitial formats in both desktop and mobile specific versions, including:

The ad company has also launched a new Media Billboard Banner, which is a new desktop 970 x 250 format that sits on the top of the publisher site’s page and can be skipped by the user at any time.

It has also launched additional and improved In-Video ad formats, including two new additional in-video sizes: 728 x 90 and 488 x 60. Both will appear just like ads on YouTube within a publisher’s video player and will be available as Pre-roll/Custom/Post-roll and On Pause.

ExoClick’s CEO and founder Benjamin Fonzé commented: “With Google’s new restrictions now in full force, we are committed to ensuring that our publishers have the best collection of ad formats available to them so that they can monetize their content while improving user experience. For advertisers we are offering an excellent, wide range of Google friendly ad formats to enable them to reach users and convert their offers. This is just the start, later in March we will providing even more ‘user friendly’ ad formats for clients on ExoClick’s network.”