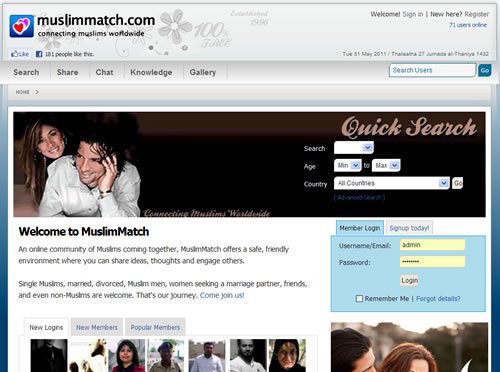 Muslim Match is the latest dating site to be the victim of a security breach.

The user information and profiles of over 150,000 people has been posted online, according to a new report in Motherboard.

The hacked data also includes over half a million private messages sent between its users.

Top security researcher Troy Hunt said the data includes personal information such as: whether a user is a convert or not, their marital and living status, employment, and if they would consider polygamy.

Hunt has since added the dataset to his website, HaveIBeenPwned, which lets users find out if their personal data has been hacked and leaked online.

Muslim Match was launched in 2000 for “single, divorced, widowed & married Muslims”, to “share ideas, thoughts and find a suitable marriage partner”, and has users in the UK, Pakistan and the US.

Motherboard says it seems as if Muslim Match didn’t use HTTPS to secure its site, and that the hacker may have used an SQL-injection to gain access to the platform.

At the time of writing, Muslim Match is currently down.

Read more about the hack here.