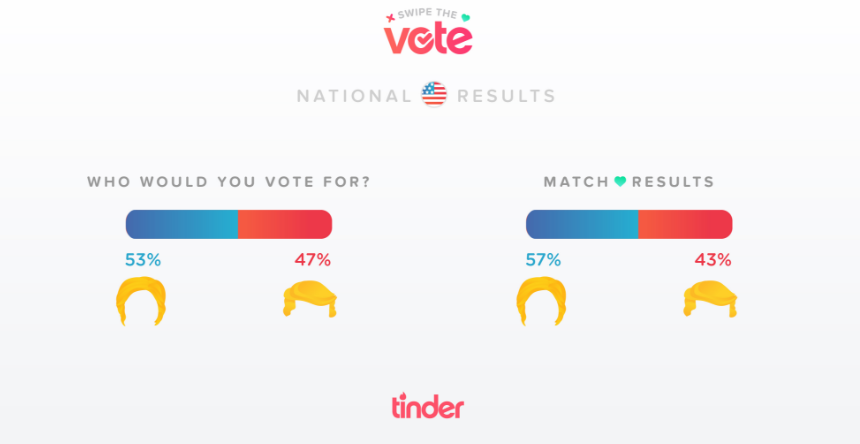 Last week, Tinder launched its Swipe The Vote poll ahead of the upcoming US presidential election, and the results put Hillary Clinton out in first.

Swipe The Vote, which was launched in partnership with Rock The Vote, worked by showing Tinder users a special election-related card, which if tapped took them into a swipe-style poll.

Launched in 16 countries, the poll asked Tinder users in the US, Argentina, Australia, Brazil, Canada, Chile, Colombia, France, Germany, India, Japan, Korea, Mexico, Russia, Spain and the UK to indicate their views on some of the most pressing issues in this year’s election.

Users were then asked to say how they plan to vote, before the app matched them with the candidate they were most compatible with – Hillary Clinton or Donald Trump – based on the answers they gave to the previous questions.

And Tinder has now released the results of its poll, with Hillary Clinton coming out on top, with 80% of global users having been matched with the Democratic candidate based on their views on key issues from this year’s election.

This sees Donald Trump matching with 20% of Tinder users globally.

The results from Tinder’s American users alone also show the majority (57%) to have matched with Clinton, compared to 43% with Trump.

And the America-only figures were even closer when users were asked who they plan to vote for, with 53% choosing Clinton and 47% opting for Trump.

However, perhaps the most interesting result comes from Tinder’s Russian users, who voted very much in favour of Donald Trump, with 71% saying they would vote for the Republican candidate.

This said, 76% of Russians were matched with Clinton based on their views on key issues.

And in terms of the topics, Tinder users voted in favour of free college tuition, with 56% voting for the policy.

However, opinions were divided over gun laws, with 53% of men opting for fewer regulations, but 67% of women wanting more.