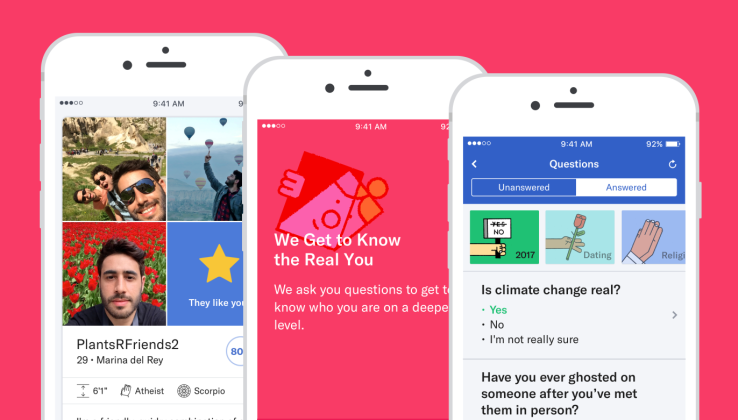 OkCupid has changed its names policy, and users now have to use their full name and not a username. Reportedly, the change has left its users unhappy.

The platform made the announcement last week to try and eliminate one of the differences between OkCupid and other dating apps like Bumble and Tinder, who both encourage users to log in via Facebook and have their real names on their profile.

Since the announcement, OkCupid has faced a backlash of bad reviews on Apple’s App Store, with over half of December’s reviews (56.3%) have only a one star rating. This is up from a third in November.

If only the reviews from the past two months were on display in the App Store, it would give the app a 2.2 star rating.

One user, ‘UniqueTwain,’ wrote in one of the reviews: “Some of us prefer the privacy of individual user names. When it comes to my name I would prefer someone get to know me and simply ask. It’s not like I go to a party with my nickname or a name badge or monogrammed clothing on. No, I have to talk to people and get to know them and let them tell me their name. Why should it be any different online?”

Another user, ‘tby77’ wrote: “Match.com should just shutter OKCupid at this point — they already own Tinder, no need to build a second Tinder.”

OkCupid wrote in a blog post that the reason behind the change was to get rid of silly usernames people have used over the years, including ‘DoritoprincessXO’, ‘DaddyzPrincess29’, ‘StayingPawwsitive’, ‘Dootdootledootd0’, ‘laidback___stu’ and ‘BigDaddyFlash916’.

OkCupid potentially made matters worse by logging users out if they didn’t comply to the new policy. Others were angry as they had just paid $50 to change their username within a premium upgrade.

OkCupid has tried to regain trust and soften privacy concerns by tweeting that users can use their name, initials or a nickname that they would want a date to call them.

We love our members. You do not need to use your government name or even your full first name. Use the name, nickname, or initials you’d like your date to call you on OkCupid.

The company also provided the following statement in a blog post in response to Tech Crunch’s questions about the policy change:

“To give you some more background as to why we made the decision to remove usernames — this is a part of our mission to add more substance and depth to dating. OkCupid wants to make the experience more personal. Having a name adds more of a human element versus a ‘username’.

In response to the ‘workarounds’ we have stated that in order to qualify as a name it just has to be two letters minimum, no numbers or symbols. We also have a list of banned words that would not qualify. It’s important to clarify that this does not need to be your real/legal name, it can be any name that you want someone to call you.

We don’t have any plans to bring usernames back. We know some folks don’t like that usernames are going away but we get many (thousands!) of messages from folks who say they are offended by some of the usernames people make…or they just have a really really hard time coming up with one and can we help them create something that incorporates dinosaurs, tacos or pizza and ideally all three. Or they came up with a seriously awesome user name, and now they forgot it and can we please help them recover it. And we get thousands of requests to change their username because it doesn’t feel like the right thing anymore.

We are about safety and security of our users more than anything. That’s why we were the first dating app to introduce the Dating Pledge earlier this year. That’s why we have an incredible moderation team that personally reviews any issues and gets rid of folks that violate our rules.

Since we’ve made the change, we’ve heard from lots of people that it makes OkCupid a bit more human. And isn’t that the right move for a dating app?”