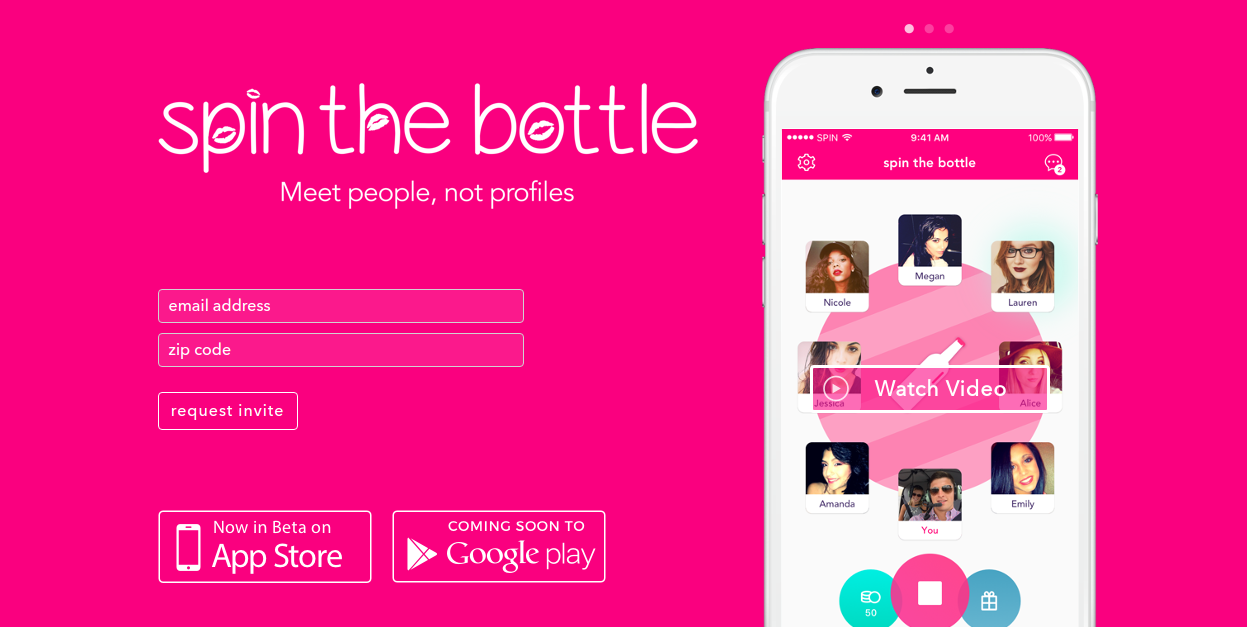 With so many apps focused on picture-orientated dating, Spin The Bottle aims to offer singles a way to meet other people in a more personalised way, by moving away from overly edited photos and in-app messaging to video.

Matthew Cohen, CEO and co-founder of Spin Labs, said: “We believe that when it comes to online dating, video is better.

“By facilitating live face-to-face meetings as part of our matchmaking process, our users can assess not only physical attraction but also personality and, most importantly, chemistry.

“This will lead to more meaningful connections, better in person dates and will reduce the number of dates needed to find a match.”

The app, which is expected to launch soon for iOS, works using a virtual version of the classic spin the bottle game.

The set up works like this: the home screen will show a wheel of seven potential matches, with a bottle in the centre of the ring.

Each of these seven people are chosen by the app based on your gender, age and distance preferences, and every few seconds, the wheel will rotate to show a brand new person – however, this does knock off someone else on the wheel.

Each person can be clicked on to reveal more information, including their name, age, distance, any similar interests and the number of mutual friends you may have with them.

To start playing, all you have to do is swipe your finger across the bottle in the centre of the circle to start it spinning.

And once it stops, you have just five seconds to prepare yourself before the app connects you with your match for a face-to-face “video date”.

If things are going well, you can send the person a virtual kiss which, if reciprocated, will match you with the other user.

If a match occurs, you will be able to message and video call the person to your heart’s content, and see more about them on their profile.

Spin The Bottle also offers three bonus features – Flick, Freeze and Direct Hit – which can be downloaded by purchasing virtual coins in-app or by winning on the Daily Bonus Spin.

With Flick, you can delete the users you don’t really fancy from your wheel, never to see them again.

In an opposite move, users can also make a direct hit and choose one person in the wheel they want to have a video date with.

And if the video call is going well, you can also freeze the time, prolonging it by an extra 30 seconds – if the other person also chooses this option, the chat could last as long as 90 seconds.

Cohen said: “Spin the Bottle has always been a game of chance, so we want users to feel that excitement as the bottle spins and they enter into these face-to-face video dates.

“It’s exciting and we think people are really going to love it!”

The app also prides itself on its efforts to combat online safety risks, with its “no face, no date” policy.

This means that the app’s third party service WebRTC, which is responsible for the video dates, will detect the kind of content that is shown in each video and if no face is detected, it will blur out the image.

As for future plans for Spin The Bottle, Cohen explains: “The app is currently in private beta and set to be released on the App Store in the coming weeks.

“To be among the first to play, users may request beta invites at SpinTheBottle.

“We will also be releasing our Android app by the end of the year, and we have plans to roll out lots of new features over the next few months.”