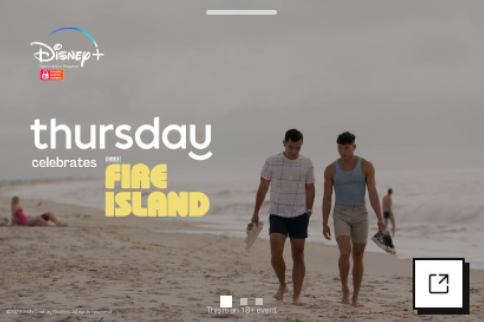 Dating platform Thursday is collaborating with streaming platform Disney+ to promote the launch of their new original movie, Fire Island.

In a LinkedIn post, Thursday said: “This week, we’re transporting our members to Fire Island to celebrate the launch of this new LGBTQ+ film.

“We were lucky enough to see a private screening of this film – 10/10 recommend! It’s a pride and prejudice style film about love, friendship and all things queer!”

“Fire Island,” directed by Andrew Ahn, focuses on two gay Asian men and their group of queer friends as they travel to the iconic LGBTQ beach haven just off the coast of Long Island in New York.

To celebrate the launch, Thursday are hosting an exclusive singles event on Limin Beach Club, London.

Thursday launched in mid-2021, and has taken the dating world in London by storm. Described by the name, the app is only operational on Thursdays, allowing singles to make quick matches and organising dates for that very same evening. All activity will disappear at the end of the day, with users starting afresh the next week.

The encouragement from developers is to log on and search for a match if they’re free to meet later that day, cutting out the small talk and lead to more seamless connections.