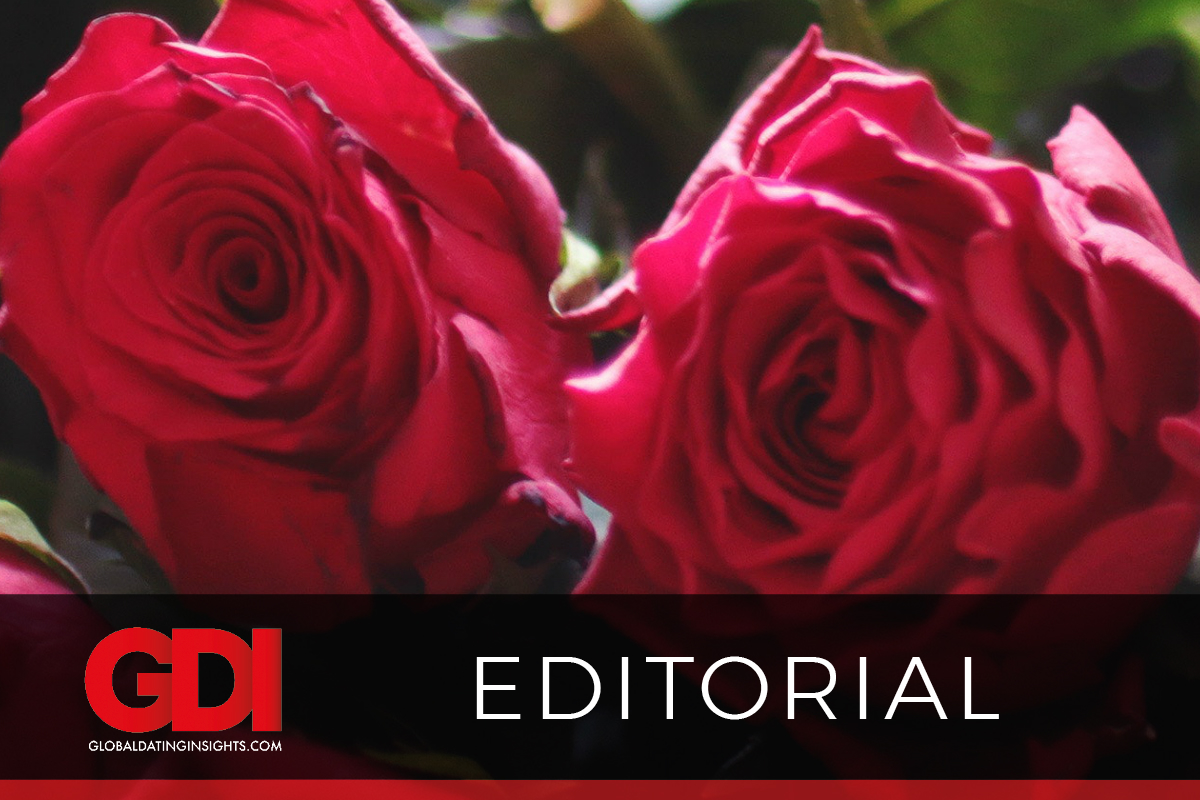 One way of conceptualising the role of online dating companies is to say that they seek to understand and supply romantic chemistry. If an app could reliably pair a user up with people they felt some immediate connection to, it would have a smart formula for reducing loneliness and be the perfect utility from a user perspective.

Navigating towards such an interface is not at all straightforward, however. The predictors of compatibility are few and far between: common interests, common backgrounds, and common friends are all flawed in this regard, and singles may not even report their own dating preferences accurately. Physical attraction and a ‘spark’ might be different and separable phenomena, and spending time together can change an otherwise uninterested pair of daters.

Faced with this complexity, designers must debate whether or not to invest heavily in understanding their users at the psychological level. The incomplete science of attraction may be a poor (time or money) investment vis-a-vis marketing or acquisition for a startup, or it may give them a competitive edge. This month’s GDI Editorial sees two psychologists weigh in on the topic, outlining compatibility science and noting how their fields can influence and assist the dating industry.

Madeleine Mason Roantree MBPsS is the Director of Relationship Psychology Services at The Vida Consultancy. Her research on social intelligence has been published in Personality & Individual Differences, and she now focuses on dating topics such as “commitment-phobia”. She is trained in Cognitive Behavioural Therapy (CBT), and has worked as an occupational therapist in mental health.

Claire Stott is Badoo’s in-house psychologist. By tying together evolutionary psychology and biological anthropology with Badoo’s treasure trove of big data, Claire has developed a deep understanding of what it is like to date in the 21st century. With her strong academic background in behavioural research, and MSc thesis on online dating, she’s Badoo’s go-to person for all dating insights.

Read the full conversation below:

Before turning to online dating specifically, could you give us an idea of some of the live debates and recent findings in your particular area of relationship psychology?

These results are quite groundbreaking as they show us that having resources is not the be all and end all for men – their likelihood to commit takes precedence in a long-term relationship. This makes sense logically, as a man’s investment potential means nothing without his commitment to the relationship. The results could also be linked to increasing gender equality and women’s financial independence.”

In some sense, the ‘holy grail’ of online dating is being able to accurately predict compatibility between two strangers. Do you see signs that this science is advancing, or are algorithms always likely to fall short?

CS: “Science is advancing in this space and dating apps are already making suggestions for users on who they will best match with. The one thing science cannot predict though is whether two people will experience a ‘spark’ in real life. A couple who are extremely compatible on paper will not necessarily hit it off when on a date together.

Quite often people can’t really explain why they fancy someone, especially someone who falls outside of their usual type. Our brain ties together multiple physical and personality cues to make a judgement on someone, and we do this almost unconsciously. Machine learning on the other hand, relies on more static cues such as photos. It cannot (yet, at least…) understand the subtleties and unpredictability of attraction that happens in real life.

In addition, even when an algorithm accurately predicts compatibility between two strangers, a successful connection/relationship between them depends on them being ready and willing to connect with each other. When forming relationships, timing is everything. Often people will meet the right person at the wrong time.”

MM: “I think there is more to a relationship than a compatibility algorithm. With the current trend of data mining, algorithms can become more accurate, however they fall short of ‘psychological’ factors such as poor self-awareness and various facets of anxiety that arise in dating.

For example, someone may genuinely believe they want to settle down, but find themselves sabotaging dates with compatible people because of an underlying and unconscious fear of commitment. In this instance, you can put many compatible dates in front of that person and a long-term relationship would not emerge. Algorithms help with filtering, certainly; but they don’t factor in many aspects of attractiveness or compatibility such as body language, social skills, manners or shared values.

A further limitation is that many online users lie about their age or height, or use old photos etc. (even on social media verified accounts), which will skew the data. One study found that 81% of people lie on their online dating profiles. The top two traits that people lie about are their height and weight. Online services recognise the current limitations of algorithms and include events in their offerings.” We see a lot of statistics suggesting men prefer to search for younger women, women are choosier than men (particularly when those women are under 30), men who are over 6’0 have the most popular profiles etc. – does online dating data always support evolutinary theories in such a clear-cut way? Are there any areas where it contradicts evolutionary thought?

CS: “Yes, high level data will support evolutionary theory in a consistent way. We see this across many aspects such as gender-related preferences, pickiness and popularity of physical traits and professions. Of course, we are looking here at millions of data points. When looking more granularly, we often see contradictions to evolutionary theory. This is because behaviour can be influenced by many other things such as cultural norms, religion and even rural versus urban living. Indeed, there are large discrepancies in men and women’s choosiness between countries.

In addition, single people now have access to more dating opportunities than ever before. We should become pickier when faced with lots of choice, tying in with the paradox of choice theory. In London though – where people have pretty much unlimited choice on dating apps – people end up voting yes more and getting more matches than the UK average. People embrace their options rather than being paralysed by them!

Incidentally, having access to almost unlimited potential mates is a way in which our lifestyles contradict evolutionary history. The long-term repercussions of this are not yet clear, but it is certainly an exciting time to be working in the dating industry.”

MM: “This is an interesting question, because if you look at who people ultimately end up with, the age gap between men and women in relationships is not vast at all. In around 60% of relationships, the age gap is 1-3 years, with most of those less than a year apart in age (according to US, Australia & UK data). It seems convenient to use evolutionary theory to describe the online dating search behaviour, but it  doesn’t explain the offline reality.

Social theory seems to explain this phenomenon better, whereby you are more likely to engage and meet people of a similar age bracket through social circles, universities and interests. This of course does not take online dating into account, unless the algorithms have not taken age gap into account.”

Do you feel like there is one specific concept from psychology which could really help dating apps understand user behaviour?

CS: “Yes, the sexual strategies theory from Buss and Schmitt. This theory builds upon Trivers’ theory of parental investment and Darwin’s theory of sexual selection. A central premise of it is that human mating is inherently strategic. Modern humans are descendants of a long and unbroken line of ancestors who mated successfully, and so we have inherited adaptations that solve the problems confronted by our ancestors during the course of human evolution. Preferences and decisions surrounding who to partner up with are therefore solutions to these ancestral reproductive problems.

These strategies are thought to be context-dependent and sensitive to short-term versus long-term relationships. They can manifest as desires, attractions and gut-level emotions that guide how people select partners and how much mating effort they expend. This theory therefore underpins all manners of dating behaviour, and is a key concept to get to grips with in order to better understand user behaviour on dating apps.”

MM: “Yes, attachment theory. Attachment theory states that we more or less fit into one of four categories or styles with regards to ‘relating to a significant other’.  Popularly known as Secure, Anxious, Avoidant and Ambivalent styles. According to the theory, people display different behaviours in dating and relationships, depending on their attachment style.

Those displaying a secure attachment style are the types of people who are likely to get into (and stay in) relationships quicker than any other attachment style. Those with an avoidant attachment style are more likely to be perpetually single. Avoidant, Anxious and Ambivalent have varying degrees of anxiety that can sabotage dating and healthy relationships. Attachment theory explains why some people display ‘needy’ (i.e. incessant messaging) or ‘shallow’ behaviours (i.e. dating several people at the same time).”

Swipe-based apps are often criticised for their variable reward mechanisms, which are said to trigger the same dopaminergic hit as gambling or playing video games. Elsewhere, casual dating apps rank poorly on Time Well Spent measures. What should dating apps keep in mind when they design their interface to ensure that they increase wellbeing?

CS: “Because the end goal of dating apps is getting people to date, the interface should focus on increasing between-user interactions (i.e. messaging) rather than increasing swipes. This can be achieved by opening up a text box when a user matches with another person, giving them the option to message as soon as they match. The user is more meaningfully engaged and less likely to ghost the other person as a result, and this is beneficial to wellbeing.

In addition, dating apps should have features that let users take breaks. For example, letting users set an ‘away’ status ensures that they can take a break from dating or go on holiday, whilst reassuring their potential dates that they are not ignoring them.”

MM: “This is a never-ending debate. On the one hand an app is a revenue stream, relying on volume, which to a certain extent requires people to remain single and engaged on the app. On the other hand, can one monetise this as well as increase wellbeing, if wellbeing is defined as time spent off an app? For the apps that want to incorporate a wellbeing / Time Well Spent factor, I wonder whether they could somehow reward people for meeting in real life.

Research has shown that physically being with other people increases well-being (although I don’t know whether they have factored in spending time with strangers). Nevertheless, if the match is compatible, in theory, the time should be well-spent with that person.”

What are the best sources of information for professionals and executives in the dating industry who want to know more about online dating science?

CS: “Conferences are a great way to get more knowledge of online dating science and hear the latest findings. The International Association of Relationship Research (IARR) is an interdisciplinary organisation that promotes advances in the scientific study of personal and social relationships. Their annual conference, whilst being a wholly academic offering, is a great place to get up to date with the latest research. I find most of their talks relatable to the online dating industry.”

MM: “Good question, there are your ‘standard’ books, such as Dataclysm, Modern Romance, Mathematics of Love, and Everybody Lies. GDI is a good source of info, and of course any of the dating sites and app that publish research, such as eHarmony, OKC and Match.”