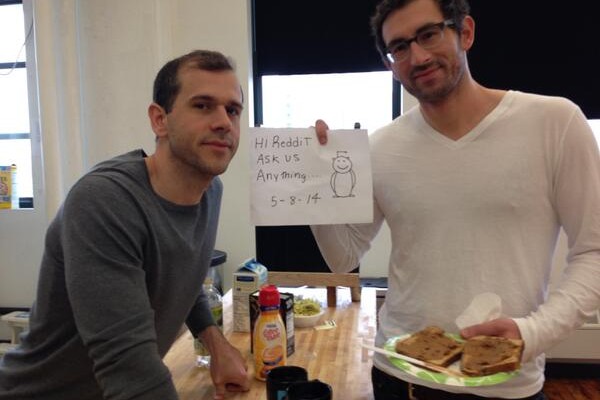 The founders of HowAboutWe, Aaron Schildkrout and Brian Schechter, recently took part in a Reddit Ask Me Anything, answering questions about love, their business philosophy, and the future of online dating.

HowAboutWe have had a very busy 2014 – the New York-based dating site launched their own lifestyle media network, acquiring Nerve.com and building three other own-brand media titles.

They also released a national version of their Couples service, and a brand new app You & Me, which was launched last month after a year of work.

Read a selection of their AMA answers below:

On the relationship between technology and love:

Brian: Technology is going to get more and more and more involved in the search for love and sex. Every advance brings with it new tools to help people figure out this all important human endeavor. Like all technologies, they can be used for good or bad…they’re often used for bad.

But I actually think we’re going to get very very very good at finding love and technology will be a huge support. Right now, we’re terrible at it — 50% of marriages end in divorce and I suspect that at least 50% of the ones that don’t end that way should….the world is huge. Compatibility is complex.

Technology is gonna end up really shaking things up in terms of how we go after this deep deep human desire.

B: We’re extremely far from being able to know scientifically if there’s a good match. The only truly conclusive research I’ve seen is that people tend to be happier in relationships if they come from the same social world. Class and race (generally speaking) tend to matter.

The algorithms on dating sites are usually about engagement on the site more so than finding a true match. And I definitely definitely think you need to trust your heart. I mean, the whole thing about finding someone is about the heart, after all.

On couples app You & Me:

The motivation behind it:

Aaron: texting sucks for love. That’s it. We wanted to make a product that made texting – and messaging in general – awesome for love. This should exist. We built it. It’s addictive and life-enhancing and fresh.

A: – amazing two person games where I can play WITH my partner against other couples. And Win. Cause we roll like that.

– the ability to print gorgeous books of your 2015.

– live streaming video that also archives so if I’m at home with the baby I can share his latest miracle with my wife at work – and have that stored.

A: The internet is the maybe the third or fourth biggest step towards deep freedom in the history of humankind. It’s an extremely powerful thing we’ve built. And it rests on a framework – a physical framework – of equality.

As such, it can promote equality to a tremendous degree. In its VERY short lifetime, we’ve already seen this take place at a breathtaking pace.

Giving up true neutrality, true baseline equality, is a terrible thing and we should fight it at all cost.

The internet could usher in a great future of radical wall-breaking equality. Or it could suck and further ensnare us in needless hierarchies and inequities. Important. Very important.

On the most bizarre HowAboutWe…s

A: How about we pretend we’re married and go for a free marriage counseling session.

B: Let’s go to night court, sneak in some beers and see how well the judge does.

As a member of our newly formed HowAboutWe Media team, I’d have to say the biggest takeaway re: our workplace culture is the almost boundless room to try something new. It’s easy to get stuck in a routine, but I’ve noticed that the people I work with are constantly open and encouraging of trying new, off-the-wall things.

Some work, some don’t, but there’s little judgment to having tried a risk and having it not work out – which is really encouraging when trying to launch a brand new vertical. Past that, the culture is very open – this is one of the first offices I’ve worked in where office politics just aren’t a thing, and people subsequently really care about their work, and helping their coworkers be fantastic.

Our editorial director has a great saying “rising tides rise all boats” (re: when one of us does well, we all help the others do well), and it’s really evident at HowAboutWe that that specific ethos is built into everything we do.

As for what I’m looking for in new hires (I run the HowAboutWe Media team): you should have a passion for what we do, you should be excited to come to work, you should want to win, and you shouldn’t be afraid to get your hands dirty and do whatever needs to be done, even if you’re on the higher end of the experience scale. We’re a small team, so everyone needs to pitch in.

On their early days marketing:

B: The first night we launched, Aaron and I spent the evening in a bar in Brooklyn talking to people about their date ideas and filming their responses. We shared the videos. We published many funny and smart blog posts. We got some great early press.

None of this “worked” but it did get us on the map in NYC. We presented at NY Tech Meetup. We got a great article in the NYTimes based on data we’d collected about how people were using the site and a great article in Gawker making fun of said NYTimes article.

We closed a deal with NYMag to power their dating experience. We figured out that there was indeed potential in advertising. And then we went national and started figuring out how to build a critical mass in the top 20 US markets through a combination of content, advertising and partnerships.

A dating site is very HARD to grow. It’s a local market place where liquidity matters immensely and where there are already established brands.

Ultimately, the idea — a dating site about getting offline on actual dates — is what has helped us so much. People just get it. It makes sense to them. But even with this fundamental stickiness, we’ve had to fight to solve distribution tooth and nail.

On how they quantify the value of a user on the site:

B: We use a metric we call a VPL, a value per lead. Every lead gets a value assigned to it based on many factors, from age and gender and geo to site behavior (like how many photos were uploaded and how long was spent on the site in the first visit)…what we do is then bucket leads by sources (specific marketing campaigns) and figure out how to get the most valuable leads without spending more on them than they cost.

Can’t share the actual values here. But we have developed this. It’s very sophisticated on the dating side, looking at hundreds of data points…on Couples, we’re just getting going on this type of project. This is obviously essential to be able to figure out a marketing budget.

A: You only need one person. You don’t need two. You don’t need 50. Your whole search is about finding that one person with whom you can share the most precious intimacy, the deepest friendship and connection, the sexiest closeness. Most people won’t like you. Who gives a fuck? That doesn’t matter. And you won’t like most people. Also: irrelevant.

All that matters is finding one person that you love and that loves you – and with whom you share a total trust that your love is just gonna get better and better. Forever.

On their longterm goals:

A: Help as many people as possible find and keep love.

Become the most trusted brand in the world for people’s deepest questions and longings around love.