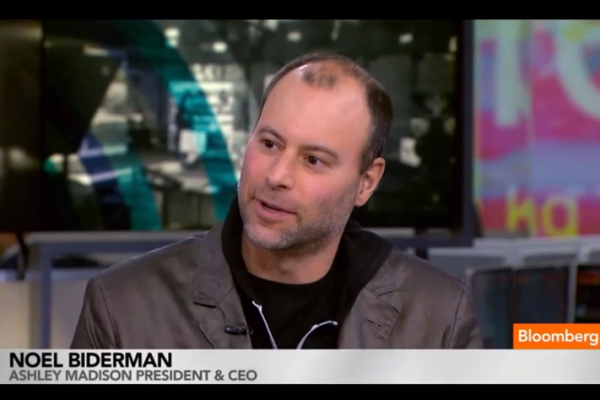 The CEO of Ashley Madison, Noel Biderman, appeared on Bloomberg to talk about his site, debate about monogamy and discuss their Valentine’s Day performance.

He said that the extra-marital site sees a huge spike in sign-ups after Feb 14th, and is the only time where they see more women join than men.

Biderman was on the show alongside famous Wall Street investor Howard Marks, who said he might invest in the site “at a price”.

Biderman’s position comes pre-packaged with controversy, and he is well-versed in justifying and arguing for his site.

However they do not ask him the most important question – whether his theories on monogamy would hold up if put into practice with his own marriage.

Justin Rocket Silverman from the New York Daily News tried to press him on this question in a recent interview, and said: “during a two-hour interview, the only time Biderman got squeamish about polyamory was when discussing it in the context of his wife.

“The only thing that holds him back, he said as his body language switched into obvious discomfort, is how badly it would hurt her if he strayed. As much as he envisions – and profits from – guilt-free sex, for now, at least, it’s not for him.”

Watch the interview below, and read the New York Daily News article here.