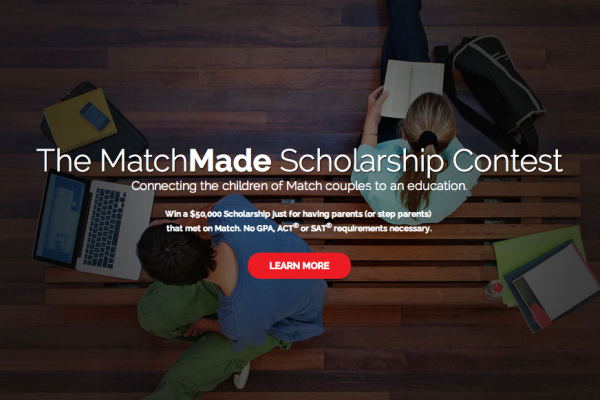 Over one million children have been born whose parents met on Match.com, the dating site has said.

And in celebration of this landmark, they have launched a contest offering a $50,000 scholarship to one of these kids.

The MatchMade Scholarship Contest is open to American students between the age of 13 and 20 whose parents met on the site.

To apply, children must upload a short video, retelling the story of how their parents met, and Match will pick 10 finalists.

From here on, the public will decide who wins the scholarship, by posting on Facebook and Twitter.

Match CEO Sam Yagan said: “Success on Match takes many forms, but of course there’s a special place in our hearts for the children involved in our members’ lives.

“By bringing their parents together, we’ve played a small role in the lives of more than one million MatchMade babies, and now with the MatchMade Scholarship Contest, we’re excited to extend that special relationship to helping those children pay for college.”

Yagan expects around 100,000 children to enter before the June 30th deadline.

The parents of the winning child will also receive $5,000 for a holiday.

Yagan recounted a story to Buzzfeed about a “kind of life-changing moment” in 2003, when he was emailed a thank you note with a picture that said: “I just had this OkBaby, thanks so much for introducing me to this guy”.

He said: “I’m a math guy, I don’t get emotional about things, but I remember actually pausing and saying, “Holy s***, the stuff we do is really important.”

“Because let’s be real – the thing about dating is if there weren’t online dating sites, people would find other ways to meet and get married.

“But those specific humans are only the result of a specific pair we put together … those million babies literally wouldn’t exist.”

Watch the MatchMade promo video below: