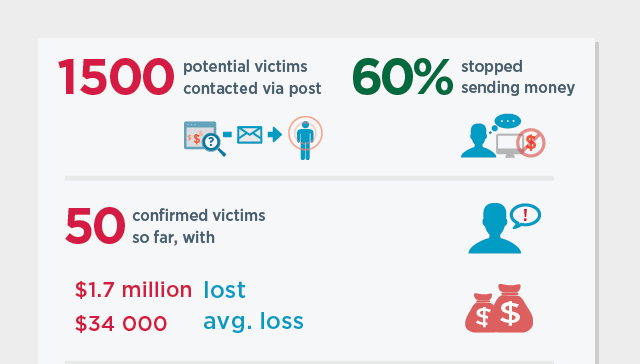 The Australian regulatory body on a mission to intervene in dating scams has sent 1,500 letters to potential victims.

The Australian Competition and Consumer Commission (ACCC), launched their Scam Disruption Project back in August, aiming to warn people about sending large amounts of money overseas.

The group said that over $23m had been sent to scammers from Australia in 2014 alone.

In order to reduce this huge loss, they have been monitoring international financial transactions – to see which Australians are sending large amounts of money to West African nations.

And since August, the ACCC have sent out 1,500 letters to potential victims, warning them they could be involved in a dating scam.

The ACCC Deputy Chair Delia Rickard said: “It is still early days and difficult to draw firm conclusions from the data collected but approximately 60% of those receiving the ACCC’s warning letters stopped sending money overseas for at least a 6 week period.

“While there is no guarantee that all of the people sent a letter will be a scam victim, there are very real questions about why people should be sending funds to these high risk jurisdictions.”

The recipients of the letters were from New South Wales and the Australian Capital Territory.

Since the launch of the campaign, the people the ACCC contacted had transferred a total of $9m.

This did not include money transferred prior to the campaign’s launch.

Interestingly, Rickard said they have noticed scammers contacting victims through social media too:

“Just over one third of these people were contacted by the scammer through social media channels. Scammers also target dating websites, email and regular mail, but this year is the first time we have collected data that clearly identifies social media is being used to facilitate fraudulent activity.”

However 75% of the targeted victims – who were equally men and women – report the relationship beginning on a dating site.

The stories behind such scams can range from soldiers needing money for military leave passes, to requesting funds to access tied up gold bullion or inheritance.

The ACCC’s Scam Disruption Project is a joint initiative with the Australasian Consumer Fraud Taskforce (ACFT), including state and territory police and consumer affairs agencies.

Find out more about the project here.