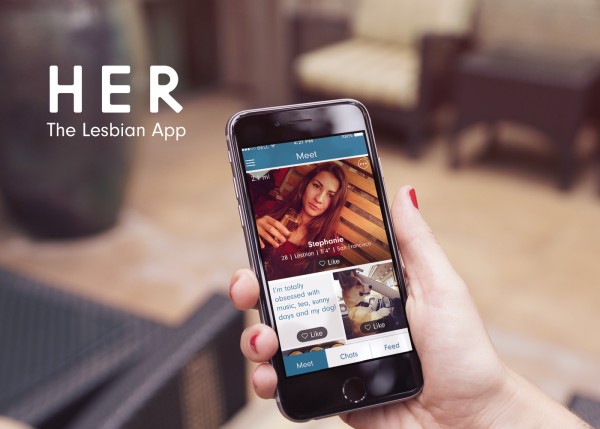 Acclaimed lesbian app Dattch has been rebranded as Her.

The app launched back in 2013 in London, and has expanded across the US and won plaudits for its female-focused philosophy.

And now the company has not just changed its name, but according to CEO & founder Robyn Exton, revamped the whole app and their entire business.

Essentially, the company has remodelled itself as more of a lesbian community, changing the way users interact and adding a strong events model – giving users info on local community events, news and blogs.

In a post on the Her blog, Robyn Exton explained why they changed their matching system, saying that on Dattch, 95% of all the messages and conversations started with the same pattern:

1. I view your profile

2. You view my profile and Like something on my profile

4. You send me a message saying something smart and funny about something we have in common

This pattern was so consistent that we realised we could probably be doing more to get you to the WE CHATS a bit easier.

And so with Her, this is exactly how users connect with one another.

They can view one profile at a time, and like anything on someone’s profile – whether it be their profile picture, specific interests, or photos they’ve posted. And if another user likes something on your profile – you connect over what you both liked, kind of like an icebreaker.

However, this new way of connecting is not like Tinder – you can always go back to browse profiles again.

And with this different user interface and experience, the company also decided to ditch the name Dattch.

Exton said this was due to misunderstanding around the name, which was was originally a combination of Date and Catch.

The CEO said this became misconstrued, and that in the past month alone she had been asked whether it meant: Dyke, Ditch, Butch, Snatch, Dutch, Catch Snatch, Dyke Catch, Date Snatch, Dykey-Butchy-Snatch.

After a long process searching for, and testing, a new name, they settled on the very simple Her.

Another change with the rebranded Her is that it will have a much heavier focus on events, after receiving lots of feedback from its members:

“On top of what we saw people doing in the app, we also had A LOT of feedback about what was missing. There was one thing that repeatedly came up, no matter where we were — in surveys, in user interviews, in focus groups — everyone wanted to know about events. So we decided to create a Feed for your local community. Not only does it have all the content from our Blog, but it also has at least one event that is taking place in your city that week.” From here, you can see who is attending the event, like their profile, and chat away before you attend.

This events feature is currently being rolled out in London, Los Angeles, New York City and San Francisco, but will soon expand into Birmingham, Dublin, Glasgow, Manchester, Miami and Portland.

And with the rebranding, Her has also raised $1m in funding from investors including Bebo founder Michael Birch, Reddit founder Alexis Ohanian, and Huddle co-founder Andy McLoughlin.

Her is live in the UK, Ireland, New York, LA, San Francisco, Miami, Orlando and Portland.

It is currently only available on iOS, with an Android version coming soon.

Read more about the decision to rebrand on the Her blog here, and here.