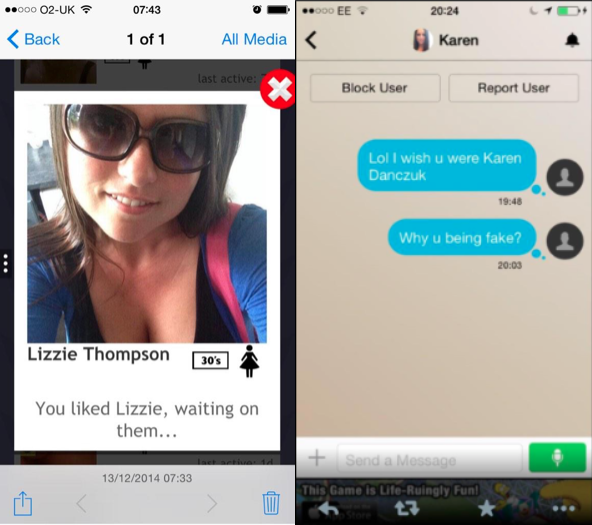 The “cleavage selfies” of a British councillor are being used by scammers for fake profiles on dating sites.

Rochdale councillor Karen Danczuk took to Twitter to say photos she posted to the social media site were being used on dating apps.

Danczuk, who is married to Labour MP Simon Danczuk, posted the following tweet:

OMG someone is on a dating website pretending to be me! What will happen if they agree to meet a man ha ha? KD pic.twitter.com/lCpomYjrwb

The app in question was Flurv, however the following day the 31-year-old said she had been sent screenshots of another profile on a different app, for a women called Lizzie Thompson.

Danczuk said other Twitter users had sent her screenshots of profiles from a number of other dating sites.

She revealed to the Huffington Post that her selfies had been used on messaging app Kik and Plenty of Fish.

Morning! I’m on another dating website this time I’m called Lizzie Thompson! Deary me lol. Should I be flattered? KD pic.twitter.com/7mkkHQ2yhB

Danczuk made the news this month when it was revealed she was selling signed pictures of her famous selfies on eBay for £10.

The prints, which are personally sent by Danczuk and sprayed with her Chanel perfume, have been sold to 121 fans.