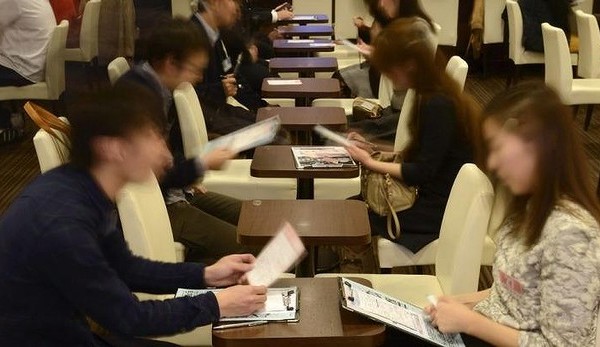 The Japanese government is funding matchmaking schemes to increase their plummeting birth rate, which has halved in the past six decades.

Around 3bn yen ($32.5m) of financial aid is being set aside in this year’s fiscal budget for local matchmaking events, designed to help boost the marriage rate and increase population.

Prime Minister Shinzo Abe is proposing this scheme for the first time, in order to counter Japan’s alarming birth rate.

If this continues, Japan could lose over a third of their population by 2060, according to data from the National Institute of Population and Social Security Research.

Masahiro Yamada, a sociology professor at Chuo University in Tokyo, said: “The falling birthrate will probably have a very severe impact on the Japanese economy.

In an effort to counter this, the government has encouraged local authorities to apply for grants of 40m yen for projects that will encourage marriage, pregnancy and birth rates, Bloomberg reports.

Events for singles, such as parties known as “machikon”, are being held in rural areas, to try and introduce singles.

Singles buy tickets to the events, which are held at bars and restaurants in towns and cities, to socialise with potential partners.

The government see such local singles events, and the promotion of marriage, as a vital way of driving the birth rate up.

Masanao Ozaki, the governor of Kochi, said: “Now is the last chance to take action on this problem.

“I’m deeply concerned as to whether young workers in the future will be able to take on such a huge burden.”