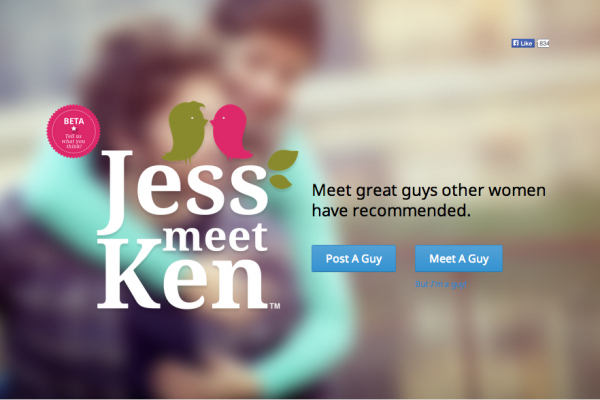 A married couple are recreating the dating site which they met on 11 years ago.

To recommend a guy, they sign in with Facebook and answer 10 questions, such as: Is he good looking? What does he do? How is his sense of humour?

Women who post profiles do so for free, and the single women who pay to browse the profiles contact the female go-between if they are interested.

This was how Ken Deckinger met his wife, Jess, when his friend Adele posted a profile for him on a similar and now defunct site.

Jess responded to Adele’s glowing review, they chatted more about him and Adele forwarded Ken her email, with the subject line: “Holy S#*% it’s Your Wife.”

The two married four years later, and after moving back to Boston, they decided to recreate the site that proved so successful for them.

“We’re doing things on our site that just weren’t possible and didn’t exist at the time, like leveraging Facebook and other cool technology that we’re putting in place that is making our site better than what existed before.”

Ken Deckinger has previous in the dating industry – he was the co-founder of HurryDate, a New York speed dating company which Spark Networks acquired in 2007.

Speaking to BostInno, he said: “The idea is that women can sell a man better than he can sell himself.

“A woman writing the profile can highlight the most endearing qualities about him, that another woman would be looking for. It’s a safe environment for women to meet men without a lot of outside noise.”