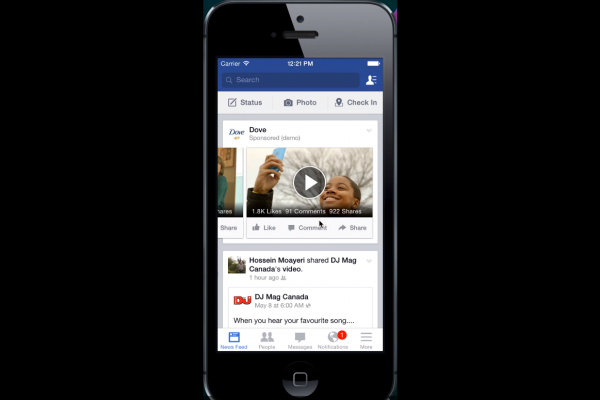 Facebook is launching their automatically playing videos in international markets including the UK.

The 15-second videos appear on both desktop and mobile, and play automatically without sound.

If clicked on, the ads expand into a full screen and the sound starts.

These Premium Video Ads will be introduced with “a limited group of advertisers” in markets including Australia, Brazil, Canada, France, Germany, Japan and the UK.

In a statement, Facebook said: “We’ll roll out Premium Video Ads slowly and monitor how people interact with them.

“This limited introduction allows us to concentrate our efforts on a smaller number of advertisers with high-quality campaigns to create the best possible experience on Facebook.”

Advertising is a huge part of Facebook’s revenue – the company’s Q1 2014 report showed that they made £1.3bn from advertising, an 82% increase from last year.

Mobile ads – the breadth of which has recently been expanded, with the launch of their Audience Network – made up 59% of this revenue.

The Premium Video Ads were first tested in December, and launched in the US in March.

Facebook users can expect to see these new adverts in the next few months.

Last year, dating sites started noticing that their ads were being rejected by Facebook, who later issued a statement saying that all dating sites must reapply after February 15th.

“We got a lot of negative feedback from people about many of these ads, and in some cases they violated various policies. To keep the quality of ads on Facebook high, we are not currently accepting new online dating advertisers.”

These new guidelines affected smaller players, with the largest dating sites like Match.com still able to advertise on the platform.