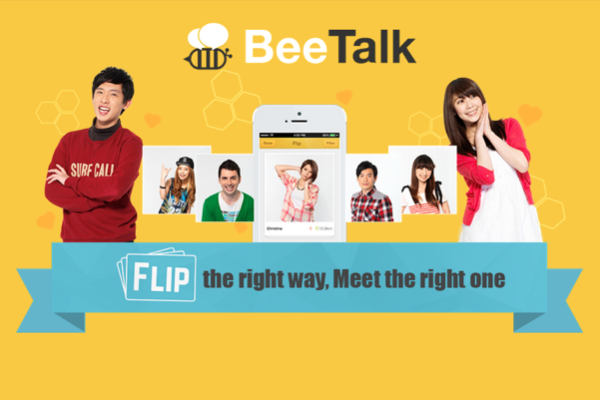 A Thai app that combines features from the most popular social apps around has taken Asia by storm – amassing 10m users in just four months.

One of BeeTalk’s main features is Flip – which lets users swipe through potential dates and acquaintances, Tinder-style.

It also employs a Snapchat-esque secret messaging service Whisper, where you can send self-deleting messages.

These can be texts, pictures, voice messages, doodles and stickers, and the messages disappear depending on the time limit set by the sender – which ranges from 1 to 15 seconds.

Like Japanese app Line, BeeTalk is sticker-assisted and also allows users to send drawings with a Doodle feature.

Their Look Around feature offers location-based friend finding, which borrows WeChat’s shake function – letting you shake your device and instantly chat with those close by

The Thai-based app was released in early 2014, and since then it has seen huge growth – reaching 10m users in just four months.

Tech In Asia reports that their main markets are Thailand and Taiwan – in the latter they generated 2m users in six weeks.

Sean Yang, BeeTalk’s head of regional marketing, told Tech In Asia they wanted to market the app as something young people’s parents wouldn’t use.

Yang said: “Line and WeChat are helping you communicate with people that you already know.

“You use it with your mom and your grandparents. The age of those apps’ average users keeps getting higher and higher. We’re trying to help you make friends with people you don’t already know.”

The app has generated this success despite competition from towering messaging apps WeChat and Line, which are both hovering around the 400m user mark.