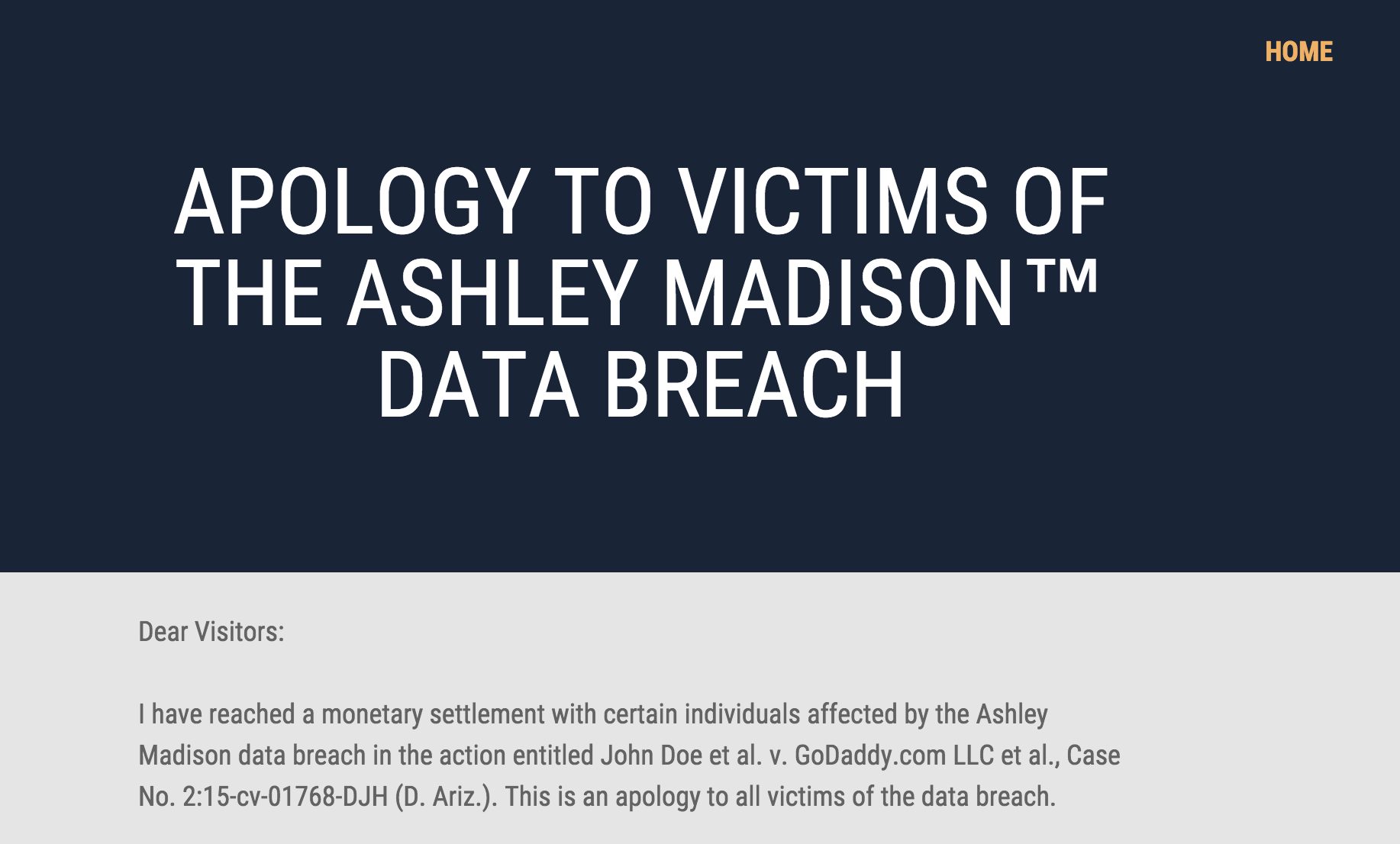 The owner of a searchable online Ashley Madison adultery finder has settled a lawsuit brought by three ex users of Ashley Madison.

The users also sued the people who created searchable databases for users of Ashley Madison, including: “ashleymadisoninvestigations.com”, “ashleymadisonpowersearch.com” and “adulterysearch.com”.

And now a message has been posted on one of the sites, Adultery Search, saying the owner has reached a “monetary settlement” in the case.

The complaint said that the hosting services and searchable databases were being sued for “intentionally inflicting emotional distress upon Ashley Madison users.”

The plaintiffs said they had been victims of threats and extortion, and note that there have already been two suicides attributed to the public dissemination of the Ashley Madison data.

They say the ISPs are liable because they hosted the information, which has led to their emotional distress.

The monetary settlement was confirmed by Forbes, who contacted the counsel to the plaintiffs in the case, who said the online letter posted on adulterysearch.com was due to a “monetary settlement between John Roe #1 in the Arizona case and the three John Doe (anonymous) plaintiffs.”

In the statement posted online, the owner of Adultery Search also offers an apology to the victims of Ashley Madison, and implores owners of similar sites to shut them down.

So far, there is no word on the status of the other searchable databases, or how the court case against GoDaddy and Amazon Web Services is going.

Read the full statement below:

I have reached a monetary settlement with certain individuals affected by the Ashley Madison data breach in the action entitled John Doe et al. v. GoDaddy.com LLC et al., Case No. 2:15-cv-01768-DJH (D. Ariz.). This is an apology to all victims of the data breach.

I regret my poor decision in disseminating any data from the breach, and I am sorry for any harm I may have caused the plaintiffs or anyone else.  I implore operators of other sites to reconsider their actions, and I will work to shut down those sites as well.

In July 2015, a hacker or hackers known as the “Impact Team” announced they had obtained data from the computers of Avid Life Media, which operates AshleyMadison.com, a dating site catering toward people looking for an extramarital affair. The Impact Team threatened to release that data unless Avid Life Media shut down Ashley Madison. In August, they made good on their threat and released five databases from the website and records of payment transactions made between March 21, 2008 and June 28, 2015. The website databases included profile information such as e-mail addresses, essays, physical descriptions, and sexual preferences. The payment history included full names and addresses along with transaction amounts and dates.

The data was released on the difficult-to-access “dark web” but quickly made its way onto the general Internet where it became available to anyone to download. Because the information was not viewable without importing the data into a database and correlating payment data with full names, and because people may have been wary about downloading the Ashley Madison data themselves, this and several other websites offered services whereby one could obtain information from the leaked databases. Some of these websites charged a fee for the service; others generated revenue from advertisements and/or marketing other services.

When I conceived, built, and executed this website, I recognized a demand for the data and how I could best meet that demand. I did not take into account the suffering that the mere availability of the data would cause. I was not the only one making the data available, but I promulgated it and for that I am sorry.

In August, three anonymous plaintiffs sued this and two other websites for causing them distress, in the action entitled John Doe et al. v. GoDaddy.com LLC et al., Case No. 2:15-cv-01768-DJH (D. Ariz.). The Plaintiffs did not detail the nature of their distress or physical symptoms they suffered, but it is not difficult to understand why they were so upset. Reports indicate that at least two individuals have committed suicide because of the perceived effects of being “outed” as Ashley Madison users.

I have now reached a settlement with the three anonymous plaintiffs. All parties want to put this behind us.

I regret my poor decisions and I am sorry for any harm I may have caused the plaintiffs and anyone else. There is no way to ensure that the data is not available on the Internet, but I and many others hope that the data will longer be readily accessible.

I also urge employers not to investigate whether employees or prospective employees may have been on Ashley Madison, and if they know, not to factor it into any employment decision.

If you are distraught over your data being available, or know someone is or was an Ashley Madison user, it is important to remember that the vast majority of Ashley Madison users did not have an affair, and it has become increasingly evident that Avid Life Media was selling a fantasy. The more people recognize that, perhaps the less shameful it will be.