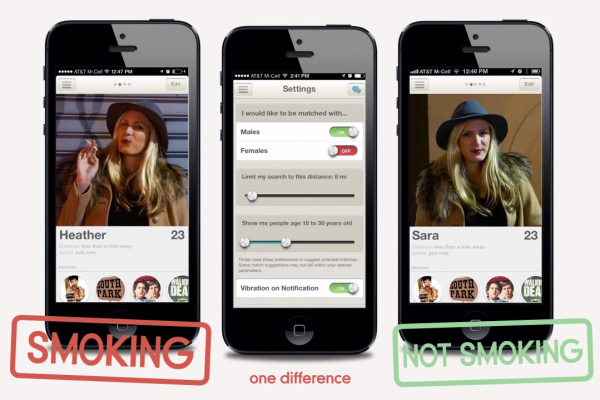 An anti-smoking group has used Tinder to try and prove that smokers are seen as less desirable to the opposite sex.

Action on Smoking & Health say that threats of death aren’t as effective in reaching a younger demographic, so the group created a campaign on Tinder to try and show 20-somethings that their dating life could suffer because of the habit.

With help from New-York based Angelle Juneau and Jeff Scardino, they created two almost identical profiles, featuring the same attractive women – but in one she was smoking, and the other she wasn’t.

Heather and Sara had the same likes anbd friends, but Heather had a cigarette in every photo.

ASH say they will do the same test for straight and gay men.

While the photos were rather stock smoking photos, and putting her with a cigarette in every photo seems like overkill, it’s an interesting way to use the dating app for a social campaign.