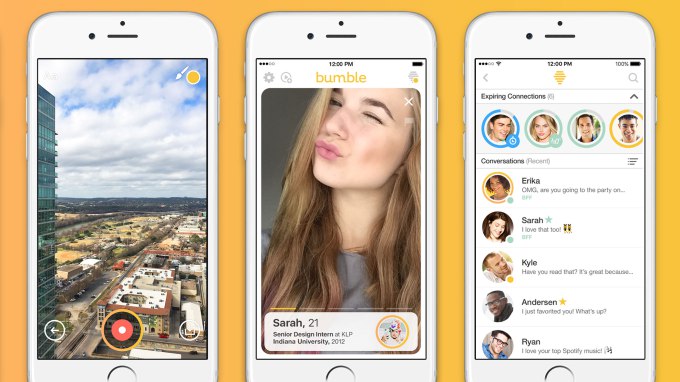 Called BumbleVID, the new feature works almost identically to Snapchat Stories and Instagram Stories, by letting users record an unlimited number of short videos from within the app.

These videos will then be collected into a thread and each clip will disappear from the user’s profile after 24 hours.

Users will also be able to edit their videos by adding drawings or doodles over the top, and Bumble is also expected to be rolling out filters and location tagging options in the near future.

Although singles will be able to upload pre-recorded videos to the app, these clips will have to have been recorded in the past 24 hours and will be distinguished from those taken within the app. Users’ BumbleVID stories can be viewed by anyone who comes across their profile – people who see their profile while swiping, their connections and those they are chatting with.

And just like the Snapchat and Instagram versions, users will be able to see how many people have viewed their story.

Rolling out over the next few weeks, BumbleVID has been in the works for some time, Bumble co-founder and CEO Whitney Wolfe told TechCrunch.

However Bumble’s founder said the potential dangers involved with introducing video to a platform that connects strangers rather than friends delayed the roll out of the video feature until now.

As it stands, the feature will only be available to users who have verified photos, a measure brought in to help improve user safety and prevent fake profiles.

BumbleVID can also work alongside this verification system, reassuring singles about the identity of the people they are talking to, as well as giving a better insight into their personality and interests.

To find out more about BumbleVID please click here.