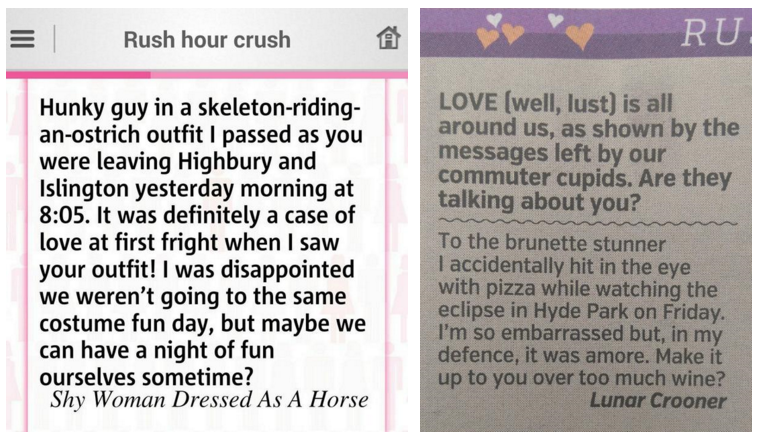 For a number of years, an Irish comedian has been sending hilarious fake letters to the “Rush Hour Crush” section of London newspaper The Metro.

Over the past eight years, Seamus O’Reilly, also known as Shocko, has been coming up with fake letters, good deeds and amusing love stories, and sending many of them to the paper’s lonely hearts-style section.

His love for writing the fake stories stemmed from regularly reading the column on his commutes around the city.

He told Mashable: “I got the idea from when I moved to London, about five years ago. They were consistently my favourite part of the newspaper.” “I think after the third or fourth one I read that made me genuinely put the paper down and look at the people in the carriage around me as if they were psychopaths, I decided I wanted to send in some for myself.”

Since having the idea, O’Reilly has now sent a total of 80 or 90 letters to the UK paper, and out of these, 19 have been published.

However, rather than discarding the rejected letters, he keeps them and re-distributes them at regular intervals, in an attempt to have them published a second time around. According to the comedian, his best achievement so far was having two fake stories published in the Metro on the same day, in the form of one good deed story and one Rush Hour Crush.

He added: “They were printed on the same page, which I suppose is a fitting end to the saga, although I’ve attempted to get in several more since.”

Check out more of O’Reilly’s funny fake letters below: