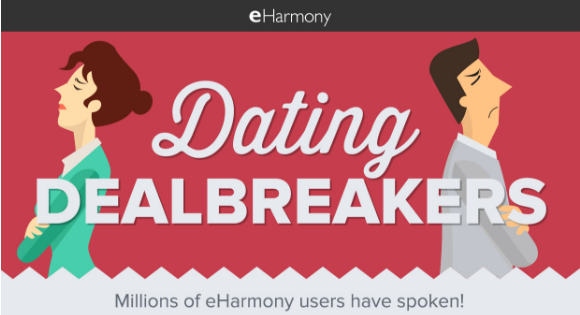 A recent eHarmony study has revealed the biggest “Dating Dealbreakers” for men and women.

Highlighting some of the biggest turnoffs for eHarmony subscribers, the study found rudeness comes up trumps, with a huge 77% of men and 79% of women saying they just could not tolerate it.

And coming in just behind was the issue of hanging out with an ex – a whopping 71% of men and 73% of women named meeting with an ex-partner as one of the biggest no-goes.

This came above people’s intolerance of lying, as 61% of men and 62% of women said they could not tolerate it.

And interestingly, men and women were largely unbothered about cursing – only 19% of men and 24% of women listed it as a dealbreaker.

eHarmony’s Jeannie Assimos said: “While we weren’t surprised to see that rudeness was an important factor for both men and women, we were interested in the fact that it beat out lying and hanging out with an ex as a Dealbreaker!

“We look at data sets like this on an ongoing basis to always better understand the things that drive both successful and unsuccessful relationships and fine tune our algorithms.

“We are the first and only online dating platform to use research-based factors that predict success in a relationship to match our users and so it’s key to our success to understand what is influencing our users’ relationships.” However, some issues didn’t seem to bother people as much.

Laziness scored low on the list of dealbreakers, with men (17%) and women (18%) appearing largely unbothered about the trait.

And being messy was rated the least likely factor to put someone off – just 6% of men and 3% of women said they couldn’t tolerate it.

However, when asked how they felt about a partner still living with their parents, men and women were divided.

Although men didn’t have much of an issue with the idea of a partner still living with their parents (79% said they wouldn’t mind), a huge 52% of women said it was a complete turnoff.

eHarmony also looked at views on drinking and smoking, with 77% of men and 66% of women saying drinking on a first date was fine.

And both genders seemed fine about smoking, with 42% of men and 31% of women saying it was “tolerable”.