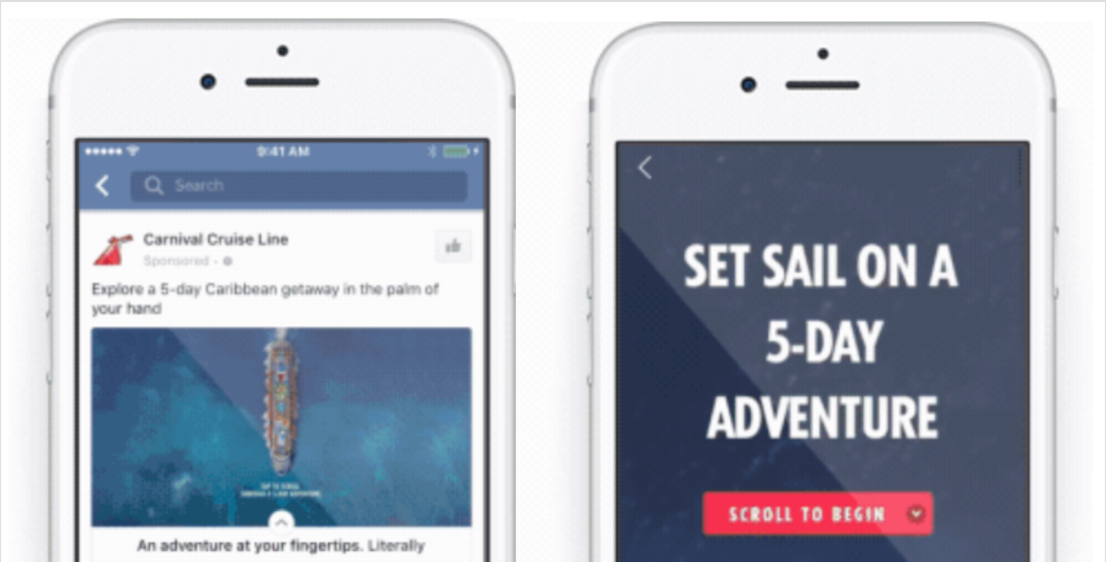 Facebook has just introduced yet another way for companies to build their brand stories on its mobile app.

Canvas is a new advertising method that allows businesses to feature full-screen ads within the platform, which can then be opened directly from a user’s News Feed.

Once opened, the post will transform into a full-screen experience, in which advertisers can combine video, still images, text and call-to-action buttons to create an engaging and interactive promotion of a product.

Within the ads, users will be able to swipe through images, tilt to view panoramic images and zoom in to view images in more detail, in an effort to further the engagement one has with the products on screen.

Canvas ads also use the same technology that makes photos and videos load quickly on Facebook, ensuring that the ads will load “10 times faster” than the mobile web.

With this, Canvas will only feature on Facebook’s mobile app, but are compatible with both Android and iOS devices. According to Facebook, Canvas was created “with input from the creative community at every step and is designed to help businesses tell stories and show products on mobile devices in a beautiful way.”

In a blog post, Head of Creative Technology at Facebook Creative Shop, Chris Jones said: “We made the creative community a priority when we designed and built Canvas.

“It’s a product that represents our commitment to creative craft and delivering the best mobile experience for businesses and people.”

After releasing the feature last week, a number of companies have already taken to Facebook mobile app to create Canvas ads.

Among the brands already using Canvas are Burberry, Coca Cola and beauty retailer L’Occitane, who used the ads to spread the word about how they source ingredients and how their products work.

Facebook have since said that this particular Canvas resulted in an 11% increase in ad recall compared to link ads alone. Whilst the introduction of Canvas ads marks the network’s first venture into full-screen advertising, it is not Facebook’s only new means of advertising through its services.

Last week, we reported that the social network will be launching ads within Messenger during Q2 of 2016, according to new information found in a leaked document.

The document, which was sent to some of the network’s biggest advertisers, was shared with TechCrunch last week, and revealed Facebook’s plans to give businesses the ability to send ads as messages to people who had previously initiated a chat thread with them.

Canvas is now available to use by companies with access to Power Editor worldwide.

Find out more about Canvas here.