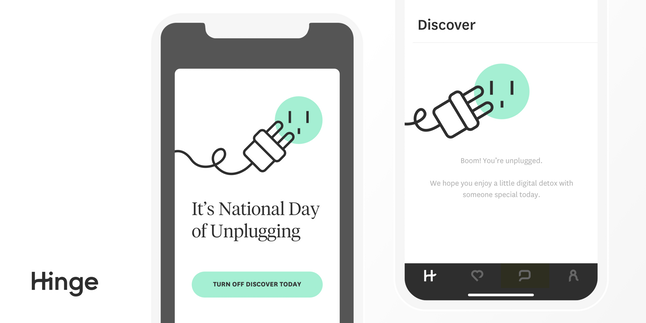 Hinge is offering free cocktails to singles who are prepared to turn their phones off for a whole 24 hours as part of the National Day of Unplugging.

Users in New York City, Los Angeles, Miami and Chicago will be sent an in-app notification reminding them to shut down their Discover page on the 1st March. Anyone who does so before 5:30pm local time will be gifted two free cocktails at the Freehand Hotel later that evening.

The night is also a phones-free event, so attendees will be encouraged to mingle and meet potential dates the old-fashioned way.

Members of the relationship app who don’t live in any of the four cities can also get involved in the promotion by disconnecting their profile for the chance to win a dream date worth $1,000.

National Day of Unplugging is a movement encouraging people to disconnect from technology from “sundown to sundown”. Participants will receive a sleeping bag to store their smartphone in for the period.

A Hinge spokesperson told Bustle that 77% of users felt they spent too much time on their phone.

Bumble introduced a Snooze button in September, as a way to take a break from swiping for a day, three days, a week, or indefinitely.

Each month, Hinge employees write up New York date suggestions to help singles who are struggling to think of ideas. The most recent update covered a short hike along Breakneck Ridge, a mountain next to the Hudson River north of the city.